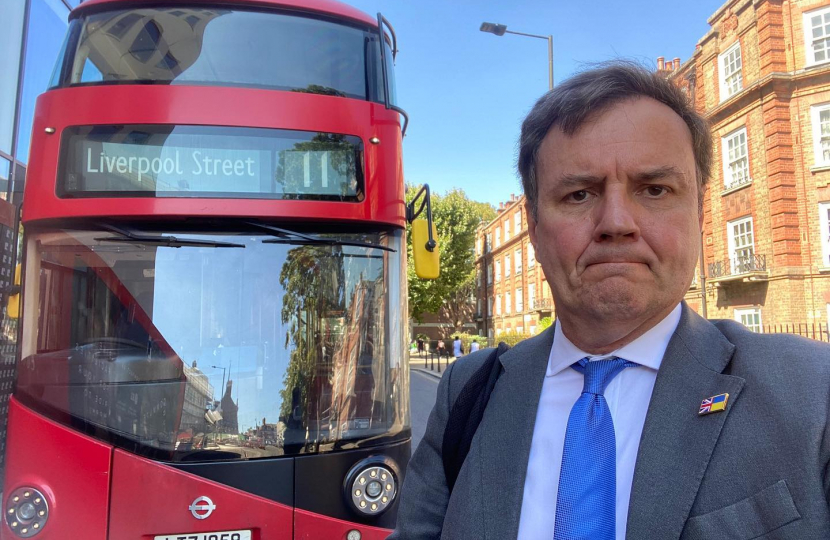 On 23 November Mayor Khan u-turned on hammering London’s buses and cancelled almost all of his proposed cuts. This is a huge campaign victory!

As many of you will know, in June this year Mayor Khan and Transport for London (TfL) revealed shocking proposals to abolish or cut back nearly 80 bus routes across London and they ran a consultation in the summer titled the Central London Bus Review.

On Wednesday 23 November, Sadiq Khan and TfL finally released their consultation report, almost 4 months after the consultation closed. There is welcome reprieve for the bus routes: 14, 74, C3 and N74. Although, the number 14 bus service had already been cut down to a reduced service earlier this year – which Greg also petitioned Mayor Khan and TfL on.

Unfortunately, these will no longer go East-West through the centre, but instead routed south of the River.

This will see an end of the iconic number 11 bus route to Liverpool Street. The current route is from Fulham to Liverpool Street, via Chelsea and Trafalgar Square. This has great tradition and is one of London’s most important routes. It also offers a vital route for commuters from my constituency into Central London and it has been a key part of the fabric of Chelsea and Fulham for more than 100 years.

The 211 and the N11 also serve strategic locations and local services in my constituency such as Chelsea and Westminster Hospital and Charing Cross Hospital. The current 211 route is from Hammersmith to Waterloo via Fulham and Chelsea. We want to see the routes unchanged.

Greg knows how important these routes are to residents.

To show Mayor Khan and TfL the need to save the existing 11, 211 and N11 bus routes, Greg has launched a new petition to keep our buses on the same routes and the existing frequencies.

Please take the time to sign the petition below and show your support for our local buses.

Petition to keep the 11, 211 and N11 bus services on the same routes and existing frequencies.