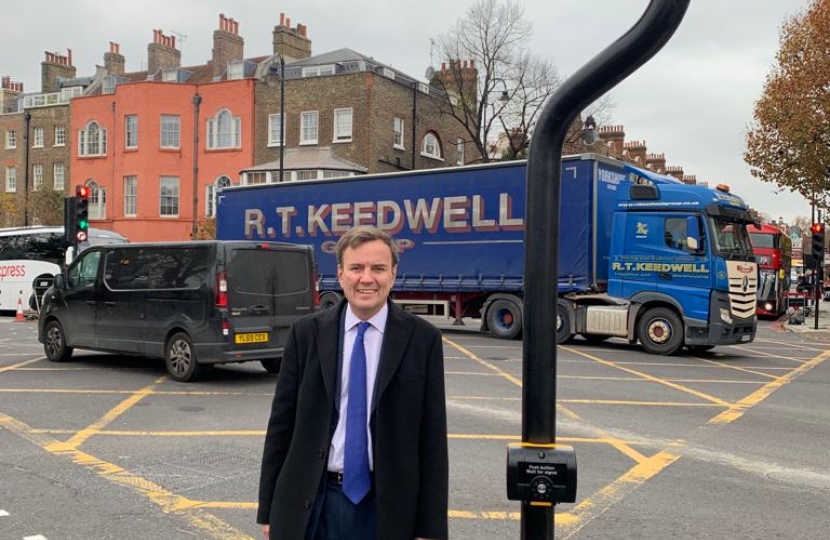 The junction of Chelsea Embankment / Battersea Bridge / Cheyne Walk / Beaufort Street and the lack of ‘Green Man’ crossing facilities has been a longstanding concern for local residents and representatives.

This junction is part of the Transport for London (TfL) Route Network and therefore it is ultimately the responsibility of TfL, which is with the with the Mayor of London, not the council or the Government.

Following the tragic and sadly fatal accident at this junction on 13 January 2021, Greg Hands MP immediately met with Tony Devenish AM, our local London Assembly Member for West Central London, and Councillor Johnny Thalassites, Lead Member for Planning, Place and The Environment at the Royal Borough of Kensington and Chelsea, to discuss concerns about the junction.


Greg also urgently wrote to the Transport Commissioner at TfL to request a meeting and outlined that TfL had confirmed a ‘Green Man’ crossing would be installed in 2005. However, this was not achieved despite TfL’s promise at the time. A copy of Greg’s letter in full is available here.


Subsequently, Greg met with the Transport Commissioner, Tony Devenish AM and Councillor Johnny Thalassites and TfL officials to discuss plans to improve pedestrian safety at the junction. At the meeting, TfL confirmed they were producing options and moving forward with a funded proposal for new pedestrian crossings.


A local residents’ petition received overwhelming support with over 26,500 signatures.


The Royal Borough of Kensington and Chelsea, TfL and Greg Hands MP had the new pedestrian lights installed and the ‘Green Man’ crossing facilities have been active since 15 November 2021. Further works are to be carried out in due course.

Greg is deeply saddened and concerned that there was another serious accident at this junction on 13 January 2022; just weeks after the lights were installed. When the accident occurred, Greg was informed by the Police that a lorry and a cyclist were involved, and that the latter required hospital treatment and has sustained life changing injuries.

Greg understands that TfL are looking urgently into improving safety at this dangerous junction further, notably for cyclists.


Representatives of the local community have written a joint letter to the Mayor of London and London’s Transport Commissioner, detailing their extreme concern about safety at the Junction and a need for immediate action.

Improving safety is paramount, and Greg will be following developments closely.

Opposing mass redevelopment on the King’s Road in Chelsea

Greg joined local campaigners in opposing a huge redevelopment on a prominent spot on the King’s Road in the heart of Chelsea where M&S is currently located.