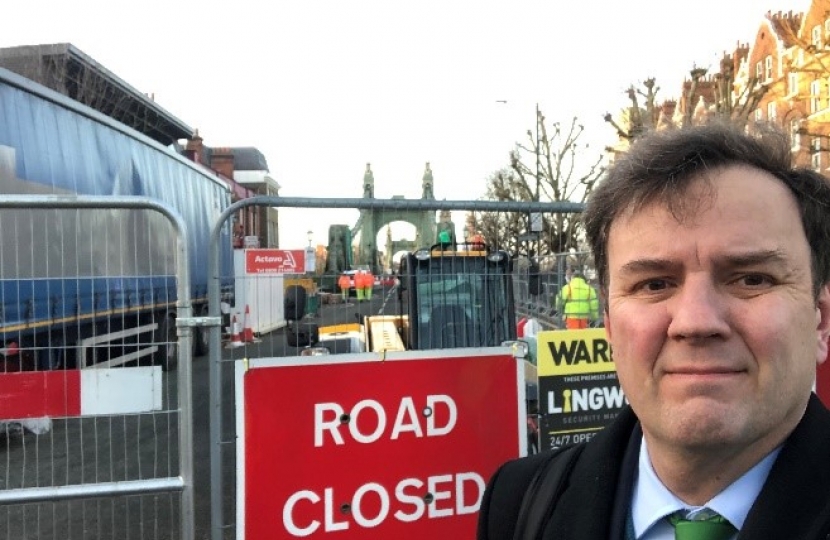 Hammersmith Bridge, owned by the London Borough of Hammersmith and Fulham (LBHF), was suddenly closed on 10 April 2019, leaving more than five miles of the River Thames uncrossable by motor vehicles. The decision to close the Bridge was made by LBHF, based on its assessment of the safety of the structure. On 13 August 2020 the bridge was then fully closed, even for pedestrians and cyclists.

Greg Hands MP continues to call for the full re-opening of Hammersmith Bridge.

Following its sudden closure, Greg launched a petition calling on the London Borough of Hammersmith and Fulham to promptly repair and reopen the Bridge.

Greg also hosted a public meeting, which allowed residents to put their questions to officials from TfL and local representatives. LBHF were invited in good time to attend the meeting but refused to do so.

In addition to concerns about increased traffic, like many of his constituents, Greg is immensely frustrated about the delay in finding a solution. Concerns are heightened with a range of worries about dangerous school journeys, delays, access for emergency vehicles and obstructed river traffic which add to residents’ and school parents’ anguish. It is the LBHF and TfL, who are responsible for the bridge. The local council have failed local residents and commuters, to safeguard this major artery and secure the necessary repair works to see the bridge safely reopened as soon as possible.

The responsibility continues to lie with the council. Therefore, in September 2020, the Secretary of State for Transport stepped in and established the Hammersmith Bridge Taskforce. The Government is not responsible for maintaining the bridge, nor does it have the powers to make decisions on its repair. The Government-lead Taskforce is knocking heads together that a solution is presented by LBHF together with TfL as soon as possible.

In July 2021 the bridge reopened to pedestrians, cyclists and river traffic. However, Hammersmith Bridge is a vital traffic artery for constituents, whether on foot, cycle, public buses or in cars.

In March 2022, the Government announced a multimillion-pound funding package for vital restoration works to Hammersmith Bridge; confirming it will fund one third of the costs to stabilise the structure.

Greg welcomed this move and continues to fight for the bridge to be re-opened fully and safely at the earliest opportunity.