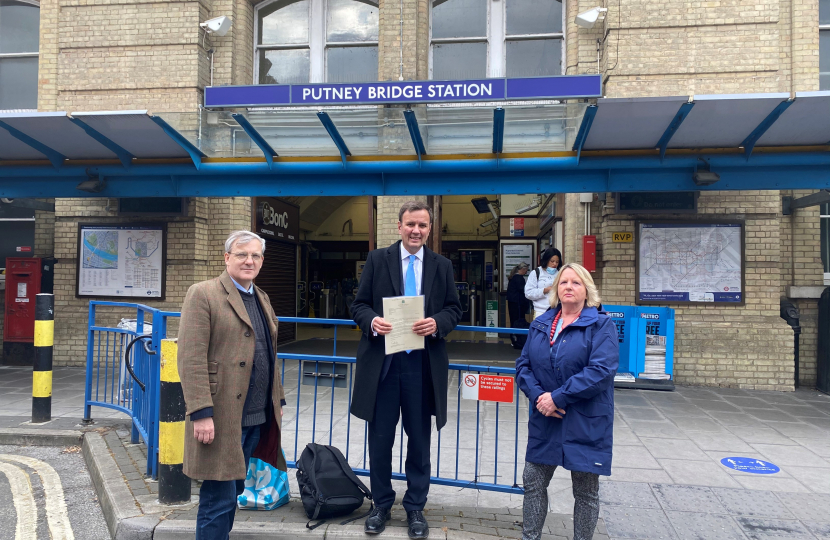 Step-free access to the District Line at Parsons Green and Putney Bridge Tube Stations, or the lack thereof, has been a concern for many constituents, especially the elderly, those with restricted mobility, families with young children and those with heavy luggage.

Both Tube stations are the least accessible in the constituency of Chelsea and Fulham, with no lift at either, and Putney Bridge having lengthy staircases. The nearest step-free access station is Fulham Broadway Tube Station. However, Greg recognises that this may not be an easy transfer and can add considerable time to journeys.

Greg organised, and submitted two petitions to Transport for London, calling for improvements to passenger accessibility at Parsons Green and Putney Bridge Tube Stations. The MP highlighted the need for a lift at both stations. Currently, people are faced with flights of stairs to access the platforms, causing difficulty for many passengers. Greg believes that as these stations are above ground level, installing a lift would be significantly less costly, compared with underground stations. Therefore, this is a viable option with positive outcomes.

In their response, TfL and the Managing Director of London Underground assured Greg that the calls for step-free access at both stations had been recognised and that they would be considered in future projects. This is positive news for residents and commuters.

Knowing that pressure needs to kept on TfL, Greg wrote to residents about the need for better pedestrian accessibility at both Tube stations and encouraged residents to take part in TfL’s Step-Free Access Consultation, and to share their personal views to shape TfL’s future approach for our local stations. The deadline for responses was 10 February 2022. Alongside many residents, Greg made a submission as the Member of Parliament for Chelsea and Fulham.

Greg believes better pedestrian accessibility at Putney Bridge and Parsons Green Tube Stations will benefit our whole community. Fundamentally, everyone should be able to use our local transport links.

In addition, as we strive towards Net Zero by 2050, installing lifts in our local stations will be highly beneficial. No one will be forced to take another mode of transport; they will be able to comfortably access tube services.

The consultation report was published on 16 November 2022, and TfL revealed that 5583 responses were received. Greg’s submission was highlighted, as was the campaign to have step-free access at Putney Bridge and Parsons Green Tube stations.

However, with no direct action from TfL, the campaign for these two Tube stations continues!

Step-free access at Putney Bridge and Parsons Green Tube Stations remains a key priority and Greg will continue to raise this directly with TfL.

In December 2021, a planning application was submitted to the London Borough of Hammersmith and Fulham (LBHF) for the land at Albert and Swedish Wharf, precisely at the corner of Wandsworth Bridge Road and Townmead Road next to Sainsbury’s and the cement works.