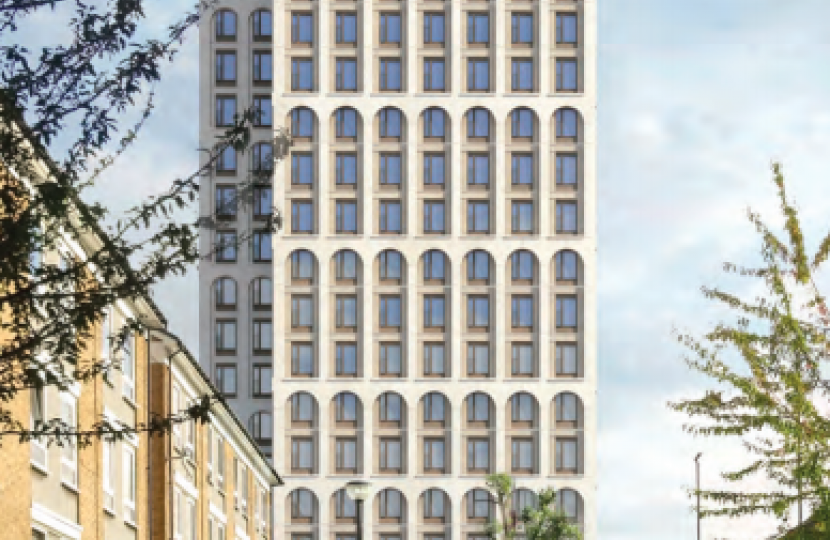 The considerable height of the proposed building is disproportionate, even to the rest of the Clem Attlee Estate, which is generally comprised of low-rise blocks, with three towers, which are much shorter than the proposed new building, but also to the wider surrounding area dominated by Victorian terraced houses. A tall building as proposed, would be seriously intrusive on the typical Fulham tree-lined streets with traditional family housing.

Greg points out that it is contrary to previous redevelopments on the Clem Attlee Estate. When the tall “Y”-Block of Hugh Dalton House was brought down in the late 1990s, it was replaced with low rise housing, much of it with gardens. Greg strongly believes that this is the kind of housing that people want to live in, not tower blocks, and that is even before considering the impact of the Coronavirus pandemic.

The construction of this development would significantly alter the local environment and skyline as well as set a precedent for future similar developments in the area.

Greg is concerned that the proposed height of Edith Summerskill House would cause serious harm to the setting of the Grade II listed St Thomas of Canterbury Church, the only complete Pugin Church in London. Historic England have objected to the planning application on these grounds.

Furthermore, both the Central Fulham and the Walham Green Conservation Areas would be negatively impacted by the enormity of the proposed development. The building would be widely visible, interfere with the uniformity of Victorian terraced houses of the Conservation Areas and dominate the skyline beyond the immediate vicinity.

In addition, Greg has concerns about the number of flats to be included in the proposed development. The suggested 133 units would almost double the previous 68 units. Though Greg welcomes affordable housing, a total of 133 new flats is an extremely high volume for the surrounding area and community. The ‘car free’ development plans do not include any parking facilities for residents or visitors whatsoever. Very little provision has been made for blue badge holders. Greg therefore has serious concerns about the impact of this enormous development on the local road network and access for some residents who may depend on cars, such as blue badge holders.

On Friday 12 November 2021, Greg Hands MP submitted a petition to the London Borough of Hammersmith and Fulham calling on the council to reinstate the Bishop’s Park Farmers Market.