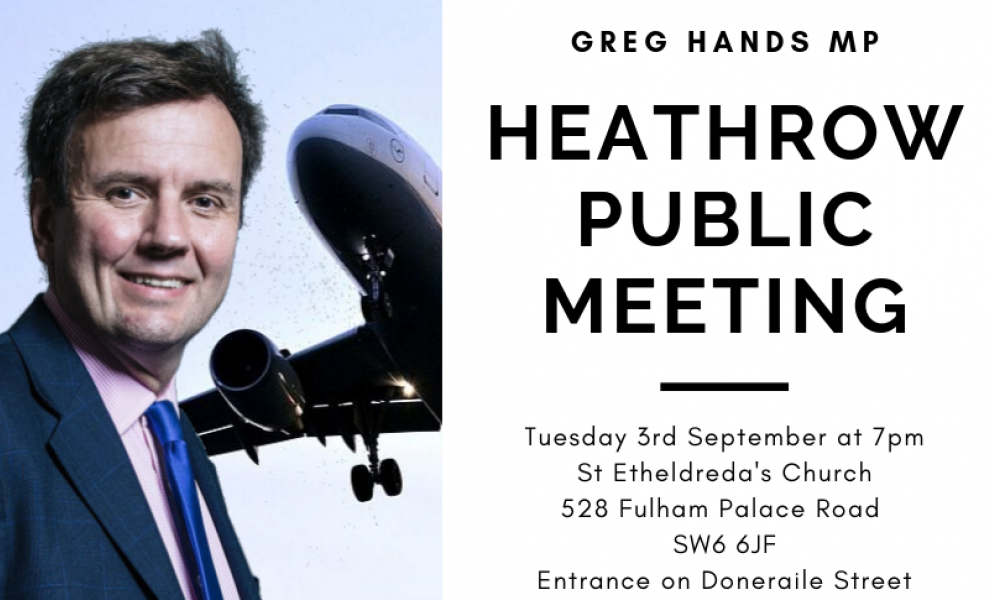 On 3 September, Greg hosted a public meeting at St. Etheldreda’s Church, Fulham with representatives from Heathrow Airport to discuss their latest consultation concerning airport infrastructure and operations. The consultation closes at 2355 on Friday 13th September, and can be responded to at https://www.heathrowconsultation.com. This follows on from Heathrow’s consultation earlier this year on airspace change – the 20,000 responses to which are currently being analysed.

In June 2018, Greg fulfilled a 2017 General Election campaign pledge and resigned from the Government in order to vote against a Third Runway at Heathrow. He remains completely opposed to the proposed expansion and has a petition against the expansion here: https://www.greghands.com/campaigns/stop-night-flights-heathrow-third-runway.

Currently, scheduled night flights only face a complete ban for a 3.5-hour period (between 1am and 4:30am). Heathrow are proposing to increase this period to 6.5 hours. Greg argued at the meeting that this extension is still inadequate, particularly in light of the Government’s recommendations that we should all be getting a minimum of 7 hours sleep per night. Greg wrote to the Health Secretary, Matt Hancock, last month questioning the implausibility of how night flights at Heathrow can fit in with these recommendations. Greg disputes Heathrow’s claim that they are proposing a ban on scheduled night flights given that the Night Period defined by UK Government policy is 2300-0700.

Unfortunately, Heathrow are planning an additional 2 landings an hour in the daytime period on the existing runways, to compensate for an increased period at night without flights.

Heathrow currently handles 480,000 air traffic movements a year, but the airport wishes to increase this number to 756,000 air traffic movements by 2050 ­— a 57% increase. The airport claim they can do this whilst affecting fewer people with noise than was the case in 2013. This will be achieved through steeper approaches, the end of ‘stacking’, and an increase in the time period without night flights.

Representatives from Heathrow outlined the possible runway modes if a third runway were to go ahead. This includes each of the three runways operating as departures only, arrivals only, or on mixed mode (in which both arrivals and departures take place). Heathrow claimed that they wish to give greater certainty to residents about when they will be overflown. The airport have also introduced differential charges whereby it is now up to 10 times cheaper to land at Heathrow with a cleaner, quieter aircraft than a noisier, older one.

The end of the Cranford Agreement has meant means that departures will soon be allowed to the east from the current northern runway at Heathrow.

Following on from a question at the Heathrow public meeting hosted by Greg earlier this year at All Saints Fulham, Heathrow installed long range cameras at the airport to see at which point aircraft gear were being lowered. It was discovered that British Airways (BA) pilots tend to lower their gear later in the approach than pilots of other airlines. BA’s policy is now being used by the airport as the model for other airlines to follow. Lowering gear increases the noise of an aircraft, and thus it is preferable to do this later in the landing approach.

Heathrow’s primary focus in terms of the environmental impact of expansion appeared to be on vehicle traffic to the airport. The airport has proposed to introduce a ‘Heathrow Low Emissions Zone’ in order to reduce the number of petrol and diesel vehicles travelling to the airport. Heathrow outlined their wish to move to an all-electric fleet vehicle fleet at the airport, including aircraft tugs.

In terms of the air quality impact of aircraft flying into and out of Heathrow, its representatives pointed out that the Committee on Climate Change (CCC) will publish their advice in relation to the Aviation 2050 strategy in the coming weeks. Heathrow’s representatives did acknowledge the need to reduce the levels of carbon emitted at the airport and by flights travelling to/from it, and that the absolute amount of carbon emitted by aircraft using the airport must be reduced and not just off-set. However, Greg believes these commitments need to be more concrete than is currently the case.

Heathrow also announced that the first electric aircraft to use the airport will be exempt from landing charges during its first year in operation. Short-haul hybrid and electric aircraft are expected to come on line by the late 2020s/early 2030s. Heathrow expressed their wish for the 25% of flights which operate domestic or European routes from the airport to benefit from this new technology.

Heathrow have asked the Government to give them limits on aircraft noise, air quality, surface access and carbon emissions, rather than an absolute limit on the number of aircraft permitted to use the airport in a given year. This quota will be reduced every year, as Heathrow claim the environmental impact of expansion will be their primary focus.

In response to Heathrow’s comments about their Community Fund, Greg pointed out that the scheme did not include Hammersmith and Fulham or Kensington and Chelsea at all, despite both areas being affected by aircraft noise.

Heathrow’s consultation closes at 2355 on Friday 13th September, and can be responded to at https://www.heathrowconsultation.com.