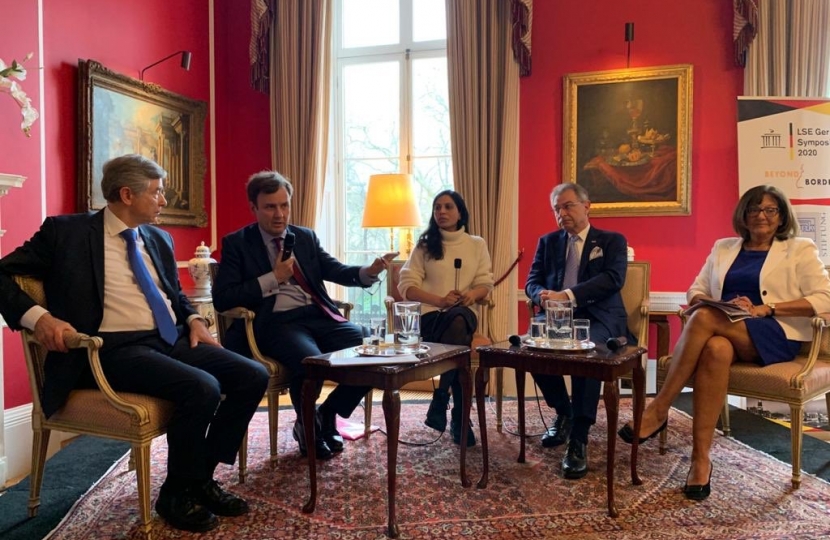 First, what great timing for this conference. Tomorrow, in this very venue, I will talking about the future of UK – German relations overall.

Today the focus is on the economy and trade.

My first point is this: that the UK and the EU really need to come to a good, comprehensive Trade Agreement this year. The political situation in the UK has changed dramatically with Boris Johnson’s comprehensive election victory 6 weeks ago. Politically, he is in the strongest position of any European head of government. Here for 5 years - probably 10 years - thanks to a mandate as strong as that of Margaret Thatcher in 1979 or Tony Blair in 1997.

Second, the EU and therefore Germany have plenty of trouble on the trade agenda. The resolution - even if only a phase 1 – between the US and China means that the US’s attention might easily turn to its trade deficit with the European Union in general, and with Germany in particular. The US’s solution to China was characteristically unilateral: agreed shares of US exports and agreed dollar volumes of particular goods. The US and the EU might well have teamed up in curbing the worst abuses of China in world trade; instead the US solution is the worst of all worlds for the rest of us: it didn’t solve the problem in China, nor did it do anything for European manufacturers or importers. So the EU keeps its trade problems with China and it might well worsen its trade relations with the United States. And don’t forget that Germany – not the EU as a whole – remains on the US list of those it believes to be abusing world trade rules.

At 11pm last Friday, the UK became the EU’s largest single export market, just behind the United States in terms of trade overall, and way ahead of China, which is now in 3rd place. So my question is this: is the EU really going to want trade disruption with its three largest external trade partners, all at the same time? And at the start of a German election year?

A better way is for Brussels to learn from the mistakes of last year, and to treat Britain with respect at this year’s talks. We both need a good outcome of the trade talks. Because, we shouldn’t be fighting each other, we should be working together to fight against growing protectionism in the United States and against trade abuses in China. And as voices for global Free Trade itself.

UK priorities for the coming year will be signing a smooth trade deal with the EU; whilst simultaneously negotiating trade deals with the United States, Japan, Australia and New Zealand, and seeking to join the CPTPP. The Department for International Trade aims to have 80% of UK trade covered by trade agreements within 3 years. This is an ambitious agenda, but who is to say that it cannot be done with our closest friends and allies?

Beyond that, the UK will be active and vocal in its traditional role as the biggest global supporter of Free Trade. This will include at the WTO, where the UK has already regained its independent place at the table. The UK can really be a bridge builder between its traditional closest allies: its European neighbours and the United States and other key WTO interests like the Cairns Group. From our abolition of the corn laws in 1846 to helping to found the General Agreement on Tariffs and Trade in 1948, the UK has long been a global leader in shaping the rules-based system.

So what does this mean for Germany and for UK-German economic relations? I believe the UK’s future independent trade policy should be seen as an opportunity for Germany. Unlike the last three years, where much opinion in Germany was focused on stopping Brexit, now is the time to realise that it has happened, and that the UK is set on a course of divergence. In my view, the best course of action is to accept that this is the reality, and to focus on the bigger picture: the bigger picture is that the UK will become the EU’s best ally in these existing trade disputes with the United States and with the coming trade dispute with China. We all need to be looking forward, not back to the Brexit divisions of the past.