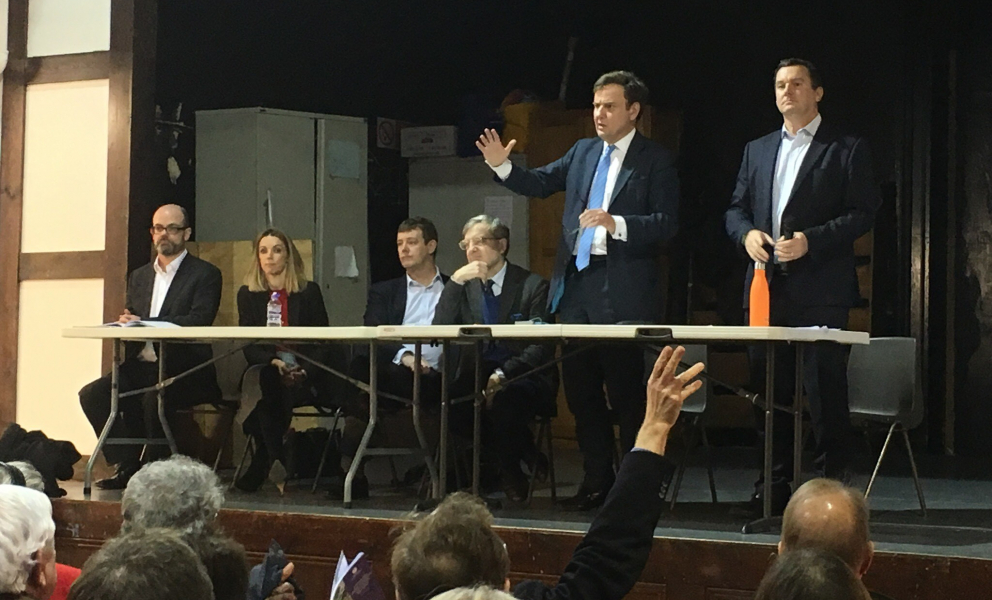 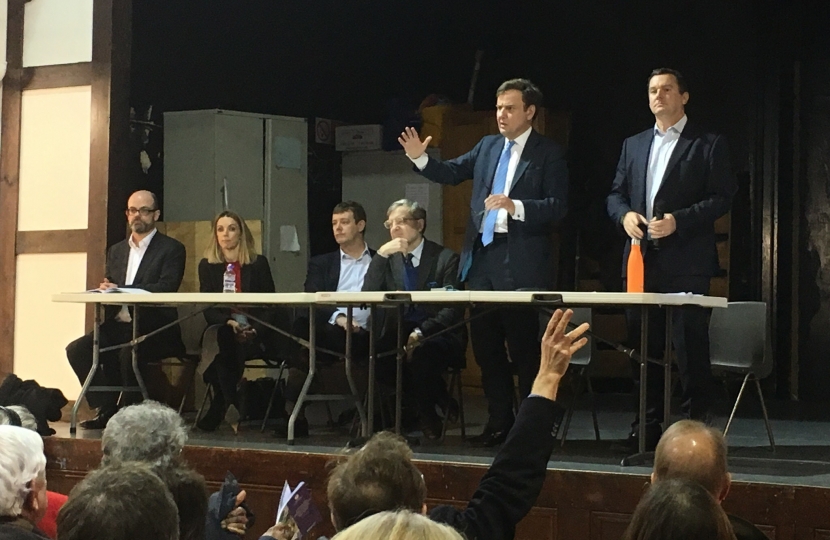 On 7th February, I chaired a lively Q&A on Heathrow expansion and their latest consultation with over 140 attendees at All Saints Church Hall, Fulham. I was pleased to see so many constituents present, particularly as this is an issue I care deeply about: indeed, an issue I resigned from Government over, so I could vote against proposals for a third runway.

On the panel alongside me were Tony Devenish, London Assembly Member for West Central, and Nigel, Kevin, Lisa and Richard all from Heathrow. Nigel is the Director of Communications at Heathrow, while Kevin and Lisa work on airspace, and Richard on noise aspects.

Heathrow began the session by talking through a presentation which sets out the next steps and stages of consultation. Among other considerations they listed, they said they were exploring independent parallel approaches, altering the time night flights begin (with the use of two runways), directional preferences and runway alternation. See more information on these issues in Heathrow’s  Making Better Use of Our Existing Runways document, and in the main consultation document Airspace and Future Operations Consultation, both of which were available in hard copy at the event.

I responded by reiterating my opposition to expansion and night flights. Night flights are indefensible whichever way you look at it, and I do not believe the convenience for a few thousand passengers should take priority over sufficient respite for perhaps millions of Londoners, including many in Chelsea and Fulham. As I said at the meeting, “flights at 6am are unreasonable. Flights at 4:30am are indefensible.”  I also questioned how the 25,000 extra flights a year – before the third runway has even been built – would be managed. Unfortunately Heathrow’s answer to this question was vague, but I will continue to press for more information.

Of great concern was Heathrow’s indication that under an expanded Heathrow certain parts of West London would experience departures for the first time ever.  Having spoken with constituents since the event, I believe there is consensus that there should be further consultation and engagement from Heathrow should this be pursued. From my own and others’ perspective, it is important that departure flight paths do not coincide with arrivals in order to ensure no community is subjected to both.

On the other hand, Heathrow have strongly hinted they were keen to remove the current westerly preference which dictates the direction planes arrive and depart. Currently, even during periods of light easterly winds aircraft will continue to land in a westerly direction. Switching to an easterly preference would mean that the split over London could become more equitable, easing the burden on areas of West London.

There were some particularly pertinent questions raised by attendees, including on methods of descent, narrow distance between the flight paths, pollution, night flights, noise respite and the issue of when aircraft open their landing gear. On the last point, there appeared to be little commitment from Heathrow to sanction or take action on aircraft prematurely lowering their landing gear. While this is an issue which is seemingly approached differently by different airlines, I and many others believe it should form part of a future operating policy.

Heathrow informed us that they have a statutory obligation to consult on infrastructure later in the year and indicated this would begin in June. They have assured me they will send the dates when confirmed, and I will update you once these are known.

Before the next stage of the Airspace Consultation in June, Heathrow have said they will provide a feedback report which shows how they have taken responses into consideration. I will pass this on once received.

You may be aware that a judicial review of the failed court case against expansion has been launched and is due to be heard in the High Court over 10 days in March.

Thank you again to all who attended my event, and to those who have been in touch since to show their support.  Since resigning from Government I have been clear that I will work tirelessly to lobby Heathrow for a quieter, less polluted Chelsea and Fulham.

Please find the two documents that were available at the event here and here.

The full suite of documents, including design envelopes which aim to show potential flight paths, can be found here.