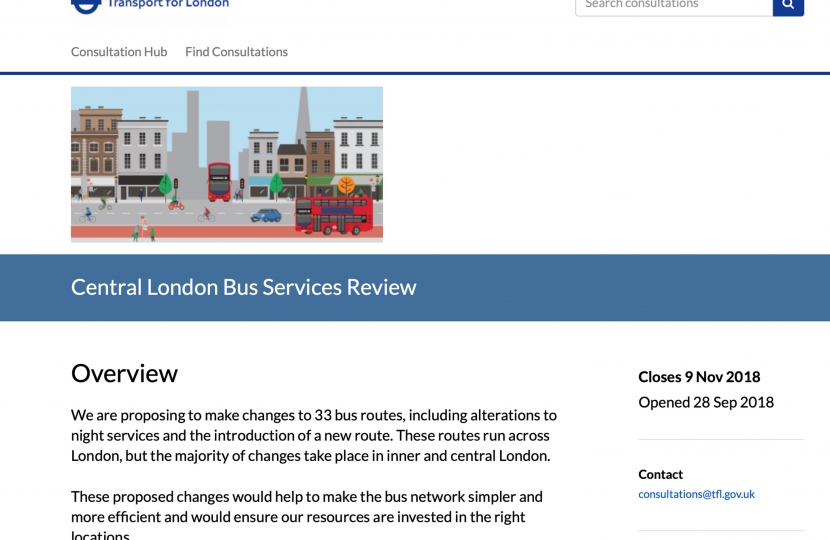 Transport for London (TfL) are proposing to make changes to 33 bus routes across London, as part of a Central London Bus Services Review. These proposals will affect local bus routes 11, 22, 19 and 14, which operate inside Chelsea and Fulham.

The local MP, Greg Hands has expressed considerable concern about these proposals and the serious impact they will have on his constituents. As such, Mr Hands has personally responded to the consultation, with his concerns:

“As the local Member of Parliament for Chelsea and Fulham, I take this opportunity to express my concerns about Transport for London’s (TfL) set of proposals for bus routes 11, 22, 14 and 19. These routes currently operate across my constituency and are used by a wide cross-section of local residents, including commuters, school children and the elderly.

"Under these proposals, while TfL has declined to use this precise terminology, route 19 services are effectively being cut, with it no longer running between Battersea Bridge and Holborn. Both Chelsea residents and the Royal Borough of Kensington and Chelsea have expressed particular concern about this proposal. As it currently stands, the 19 bus is an incredibly important source of public transport to many local residents, particularly to those who live in parts of Chelsea, who do not benefit from a nearby tube station.

"In terms of the no. 11 bus, it has long been a greatly valued bus route for many of my constituents. Starting from Fulham Broadway, it passes along the King’s Road, Sloane Square, Westminster, Trafalgar Square, Fleet Street and St Paul’s Cathedral, before finishing in the city. I would often recommend the 11 bus to visitors, as one of the best way to travel about and see London. Consequently, I am sure that many of my constituents shared my concern and disappointment to learn that this bus would no longer be operating inside the constituency, but would now start from Victoria.

"I do appreciate that that the new ‘311’ bus route is intended to provide a bridge between Fulham, Chelsea and Victoria, in light of this change. However, while it may be intended to mitigate the impact on constituents, there is something to be said for having a single bus that can take you across London. In addition, although the hopper fare would mean there would be no financial implications to these changes, there are other reasons than cost, for why people prefer direct bus routes. For instance, a great many of my elderly residents take the bus, and needing to change buses halfway through a journey will impact those with limited mobility. Let alone the obvious pressure on constituents to secure space on a bus that will be facing more adjoining passengers at Victoria - one of London’s busiest stations - which may result in long queues at the no. 11 bus stop.

"Therefore, I believe it is very important that before a decision is made on these proposals, further information be provided; for instance, TfL have yet to confirm whether the new ‘311’ bus will also be a new routemaster, with similar capacity to the current 11 bus.

"In addition, I would like reassurances about the frequency of the remaining bus routes, and that routes 11 and 22 will be able to cope with the increased demand, if the proposed cutting of route 19 is implemented. From personal experience, I am aware that routes 11 and 22 currently operate at capacity, particularly during rush hour, and at the end of the school day. As such, it would seem logical that the frequency of these buses be increased during peak times, and I would be very interesting in knowing what studies TfL have done on this.

"I hope you take mine and my constituents’ concerns into consideration, when reaching a decision on these proposed changes; I await your response with interest.”

The TfL consultation closes on 9 November 2018, and constituents are encouraged to have their say on these proposed bus cuts: https://consultations.tfl.gov.uk/buses/central-london/.