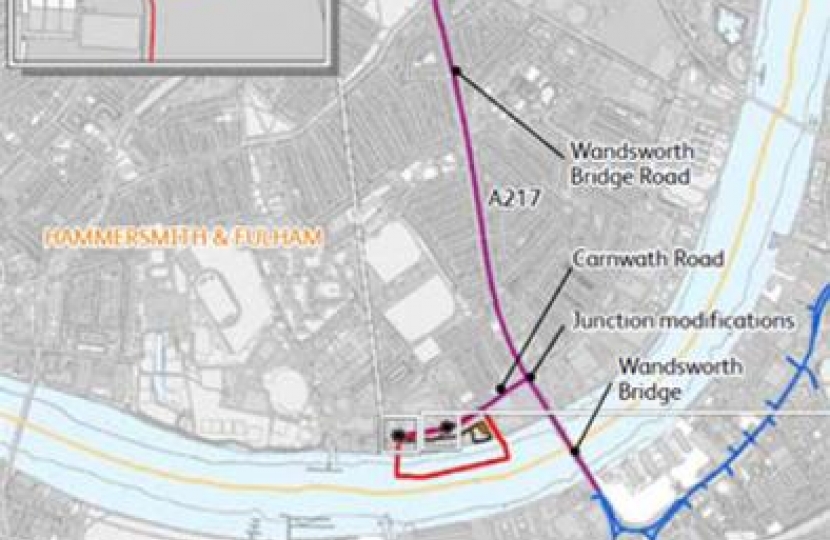 Greg Hands M.P. has discovered plans by Thames Water to route up to 29,000 lorries along New King’s Road and Wandsworth Bridge Road during construction of the Super Sewer.

Should construction go ahead at Carnwath Road in Fulham, a vast number of lorry movements will be required, producing six years of traffic misery. Lorry trips would average 31 per day for two years during main tunnelling and peak at 33 per day when the tunnel is being lined.

Thames Water plan to move all plant and construction materials by road to reduce costs. Only excavated spoil will be taken by barge, despite the existence of the wharf being given as one of their key reasons for using Carnwath Road. Although its transport strategy paper suggests it would be possible for nearly half of the remaining material to go by barge, it will “give the contractor the flexibility to determine the most practical and cost-effective means of transporting other materials and equipment.”

The route itself is revealed in supplementary document about the Carnwath Road site, which marks the “preferred lorry access to TfL road network” on a map. It would see large trucks thundering through Chelsea and down into Fulham, directly past the windows of residents’ houses.

The lorries will be used to take machinery (such as cranes and excavators), precast concrete segments for the tunnel wall, ready-mixed concrete, and aggregates like gravel. No assessment has been made by Thames Water of the impact on congestion.

Commenting, Greg Hands M.P. said: “This route would bring traffic misery. We already knew that parts of Fulham would be affected, but not on this scale. Both Fulham and Chelsea could see gridlock, as well as noise and other disruption.

“It is completely unacceptable for Thames Water to put thousands of lorries through residential areas – particularly when barges are an option.

“It was Thames Water’s choice to put the main tunnelling shaft in the heart of a residential area, when more remote sites were available.

“The impact of Thames Water’s Super Sewer will be felt by those well beyond the immediate Carnwath Road area – and tens of thousands of people in Fulham and Chelsea will see their lives blighted by lorry movements.”