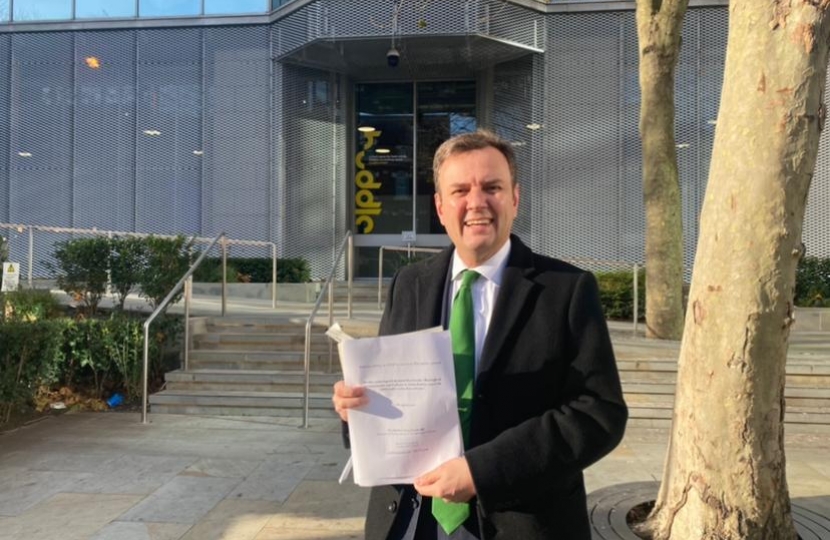 The Member of Parliament for Chelsea and Fulham has today (1 December) submitted his petition demanding the London Borough of Hammersmith and Fulham (LBHF) to immediately cancel its ‘SW6 Traffic Reduction Scheme’, which has received a staggering 5,539 signatures.

The SW6 traffic scheme, recently renamed as the ‘South Fulham traffic, congestion and pollution reduction scheme’, has created gridlock in South Fulham, with knock-on congestion and increased air pollution across Fulham as a result of the displaced traffic.

Currently under the scheme, designated restricted roads are monitored by Automatic Number Plate Recognition (ANPR) cameras which punishes unsuspecting drivers passing through the road without permitted access with a £130 PCN. Visitors, traders, outer borough local business employees and essential delivery drivers all fall out of the scope of the scheme and are subsequently penalised, with only provisions for LBHF residents to apply for a visitor permit on every occasion and restrictively limited to one per household.

Hundreds of frustrated local businesses and residents across Fulham and Chelsea have contacted their MP to raise grave concerns, including many reporting to have received multiple penalty charge notices on one occasion.

The ill-timed introduction of the controversial scheme by LBHF coincided with the scheduled maintenance works to Wandsworth Bridge – an already congested river crossing following the continued closure of Hammersmith Bridge – which reduced capacity to single lane traffic, although the first phase of works was very recently completed. Yet, for weeks LBHF have unjustifiably blamed the works for the added congestion across Fulham.

Following mounting concerns, the MP organised and chaired a virtual public meeting, just over a week ago, attended by over 130 local residents and businesses, local Councillors, officials from LBHF, representatives from Transport for London (TfL), local London Assembly Member, Tony Devenish AM, and a representative from the Wandsworth Bridge Road Association (WBRA).

The meeting provided local businesses and residents the long overdue opportunity to put their questions and concerns directly to LBHF – who are responsible for introducing and enforcing the scheme – for the first time, in some cases, given the lack of residents’ engagement and consultation ahead of the implementation of the scheme.
Further flaws of the traffic scheme were also exposed at the virtual public meeting, as the traffic data for the scheme has been opaque and despite requests, LBHF have failed to publicly publish the data except for selected working groups.

The MP for Chelsea and Fulham’s petition has unquestionably received overwhelming support with thousands of signatures supporting calls for LBHF to immediately abandon the scheme. The petition, which has now been formally submitted to LBHF, should trigger a full Council Meeting debate regarding the scheme and petition.

Commenting, Greg Hands MP said:
“From the onset, I have expressed concerns about Hammersmith and Fulham Council’s scheme and unsurprisingly thousands of residents and local businesses have also done so.
This scheme has created gridlock in South Fulham and knock on traffic issues across Fulham.

As I stated in July, and repeatedly since, the Council need to shelve its hastily conceived scheme and consult and involve residents. My petition, which I today submitted to the Chief Executive at LBHF, was signed by 5,539 individuals and calls for the immediate cancellation of its ‘SW6 traffic reduction scheme’.

Traffic in Fulham is a problem, but this is not the solution. I look forward to hearing from the Council and working constructively with them and residents to get Fulham moving again.”

This week, Greg met with the staff from the Fulham Job Centre to discuss the fantastic work they are doing in supporting the community throughout the coronavirus pandemic.