Results from my Fulham Traffic Open Meeting on Thursday! 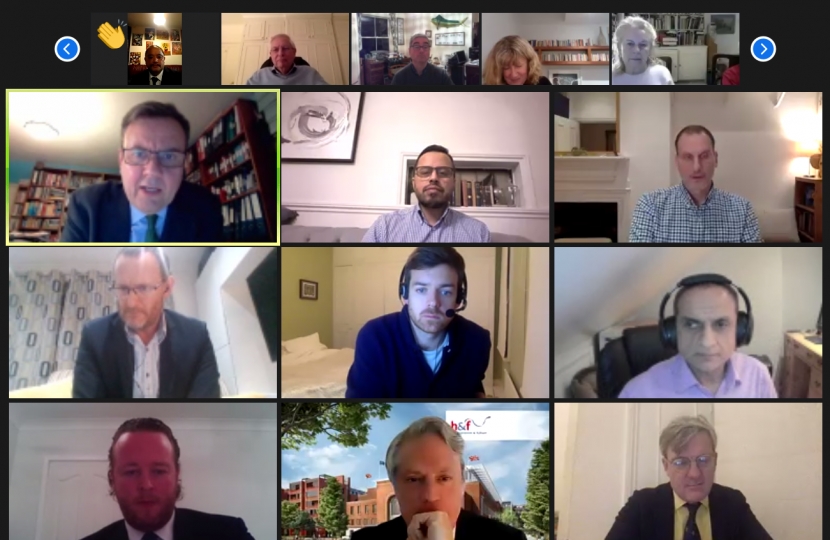 We got some real results from our Fulham Traffic Open Meeting on Thursday!

This was my first virtual public meeting of this scale (not without some technical challenges) and I was delighted to chair the event, which was attended by over 130 local residents.

I was joined on the panel by local Councillors (both Labour and Conservative), officials from the London Borough of Hammersmith & Fulham (LBHF), representatives from Transport for London (TfL), a representative from the Wandsworth Bridge Road Association (WBRA), and local London Assembly Member, Tony Devenish.

The meeting was called due to the grave concerns raised with me by many residents about the SW6 traffic scheme. I provided local residents and businesses with the opportunity to directly put their questions and concerns to LBHF who are responsible for introducing and enforcing the scheme.

Ultimately, I believe that the council was forced to change approach, particularly on the central concerns about the lack of residents’ engagement and consultation.

The meeting revealed some further information about the scheme and several key commitments were made, which I will now outline below.

First, it was very welcome for LBHF to recognise its failings regarding the closure of Harwood Terrace late last year. I had written to LBHF in advance of the closure to warn them of this, but it was progress to hear them admit to their own mistakes.

This ‘SW6 traffic reduction scheme’ or rather ‘traffic displacement scheme’, was on Thursday confirmed to have been entirely funded by the local authority, despite LBHF having previously informed me the scheme was funded by Transport for London’s Streetscape programme.

Many residents and local businesses have voiced grave concerns about the lack of consultation and engagement about the scheme, right from the introduction of the scheme until now.

LBHF emphasised that this is a trial scheme, which has been enforced under an ‘Experimental Traffic Order’. This does mean, that the scheme is still under consultation and can - and should, in my view - be cancelled or at least put on pause.

The great majority of residents seems to be unaware of the working groups LBHF referenced, and it is even more opaque how the members of the working groups were selected. This is not to denigrate the work of those on the groups – far from it – but many of them have contacted me with concerns about transparency of the whole scheme. Unfortunately, LBHF were unable to present a solid explanation.

In similar fashion, the traffic data for this scheme has been opaque and - despite requests - has not in fact been published. LBHF outlined that the traffic data had only been shared with the selected working groups, but not more widely. I therefore urged the LBHF representatives to immediately publish this data for all to access.

Furthermore, LBHF also revealed that they would not publish any data regarding the number of penalty charge notices issued, paid, disputed, cancelled and so forth. From my time as Chief Secretary to the Treasury, I appreciate working with moving data and therefore dismiss the local authority’s excuse that they are unable to publish this information. The scheme has been in place for four months and data should therefore be made publicly available, without delay.

I will continue to press for this data to be published and will use Freedom of Information requests if necessary. Interestingly, it is worth mentioning that the local authority officers did indicate that over half of the penalty charge notices issued had been cancelled, further calling into question the scheme and its approach.

Local businesses have been seriously impacted by the introduction of this scheme. Prior to the public meeting, I had been contacted by numerous local businesses with grave concerns about essential access for deliveries, customers and staff who live outside of the borough.

At a time of national crisis when all businesses are working to secure jobs, Tony Devenish AM rightly pointed out, that it is absurd for the local authority to have introduced a scheme that impacts local businesses so much. Therefore, I welcomed the commitments from LBHF to work with local businesses to help them have unrestricted access.

Concerns have also been raised about access to the permitted roads for doctors on call and other emergency service workers. LBHF officials reassured that doctors on call servicing the area were allowed and should already be on the list of permitted vehicles to access the area.

In addition, it has been widely reported that Uber no longer service the area within the SW6 traffic scheme. This has created unnecessary problems for local residents relying on a taxi service. Though, LBHF detailed they are in conversation with Uber, it is clear that further work is needed to hopefully ensure the return of the service to South Fulham.

In light of persistent concerns about access to the area and the impact on the scheme on buses, it was welcome to hear directly from TfL representatives about the local strategic bus network. TfL revealed that it had mixed data, with variations on direction of travel and bus network, in addition to differences in the routes inside and outside the SW6 scheme.

Notably, the mixed data presented by TfL contradicted the ‘on the ground’ perspective shared by residents and the WBRA. Gary Fannin from the WBRA detailed reports from the 295 operator who testified frequent and lengthy delays locally since the introduction of LBHF’s scheme, and expressed grave concerns about the 295, 28 as well as local emergency services’ access to the area if the congestion prevails.

As a regular bus user myself, I can attest to the significant delays I have experienced on certain bus routes in South Fulham and will be contacting TfL to follow up on this data. I will share this data as soon as I have it.

Wandsworth Bridge Road, also an important residential road, with over 900 households and 90 businesses, has been faced with added congestion and increased air pollution following the introduction of the scheme. I echo the concerns expressed by many residents that this needs to change, and therefore welcome the news that LBHF have finally committed to installing air quality monitors.

However, it is regrettable that it has taken such significant levels of air pollution, putting residents’ health at risk, to see action. I have been urging LBHF for years to introduce air pollution monitors and to make their air quality data in Fulham publicly accessible. In a letter to the Chief Executive in October last year, I expressed concerns about no monitoring information being available to the public for any site in Fulham. This is in spite of British Heart Foundation (BHF) figures showing that our area is in breach of World Health Organisation (WHO) legal limits.

Future of the scheme

This virtual public meeting exacerbated calls for LBHF to rethink this scheme. Though, LBHF have separately committed to holding a town hall meeting in the new year, they were unfortunately evasive and would not commit to the Council debating the scheme at its next Council Meeting.

Traffic in Fulham has been a problem for the 30 years that I have lived here. However, I do not agree that this is the solution (indeed, this scheme exacerbates it), and it is imperative that LBHF consult with the whole of Fulham, publish all the data and hold a Full Council Meeting, open to the public, to debate the scheme and its future.

Thank you to all those that attended and special thanks to the officials from LBHF and TfL for joining the panel.

Finally, I have to stress, that the Council had the opportunity to host such an open meeting themselves and following my request, have now opened up to the idea of wider consultation. Ironically, the Labour Councillor present, who appears to be in charge of the scheme, invited himself to the meeting (which I allowed), and then complained that he hadn’t been given enough ‘air time’ – but he has had four months himself to organise such a meeting!  I am prepared to work constructively with LBHF, so long as they publish the data, consult the whole community (not just selected residents and streets) and show us they have democratic support for what they are doing. I will continue to monitor the situation closely and to keep you updated.

£1,254,323 funding boost to support cultural and heritage sites in Chelsea and Fulham