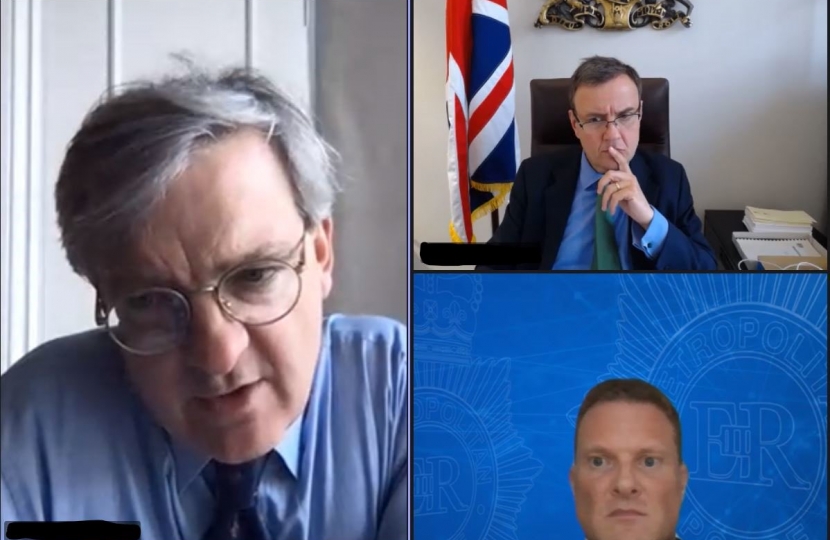 In recent weeks leading up to the meeting, the MP for Chelsea and Fulham had been contacted by residents with a range of concerns of crime locally and across London, including knife crime, antisocial behaviour, pet theft and e-scooters.

The MP, Greg Hands, was joined on the panel by Superintendent Walsh from the Central West Borough Command Unit and Tony Devenish AM, the GLA Member for West Central covering Hammersmith & Fulham, Kensington and Chelsea, City of Westminster.

The meeting was well attended by residents eager to hear of the Met Police’s work to tackle crime across Chelsea and Fulham, and wider London.

Following a short introductory presentation from Superintendent Walsh, residents asked a range of questions to the panellists including concerns about the illegal e-scooters, the use and effectiveness of CCTV, burglary and setting up Neighbourhood Watch Teams.

“Last night’s virtual public meeting was a success with residents from Fulham and Chelsea in attendance. It was clear that residents have particular concerns about the use of illegal e-scooters and enquiries about Transport for London’s trials. I will continue to closely monitor the situation and encourage residents to report concerns.”

Greg Hands MP, Member of Parliament for Chelsea and Fulham is thanking National Lottery players for their role in raising much-needed funding for local charities and community groups.