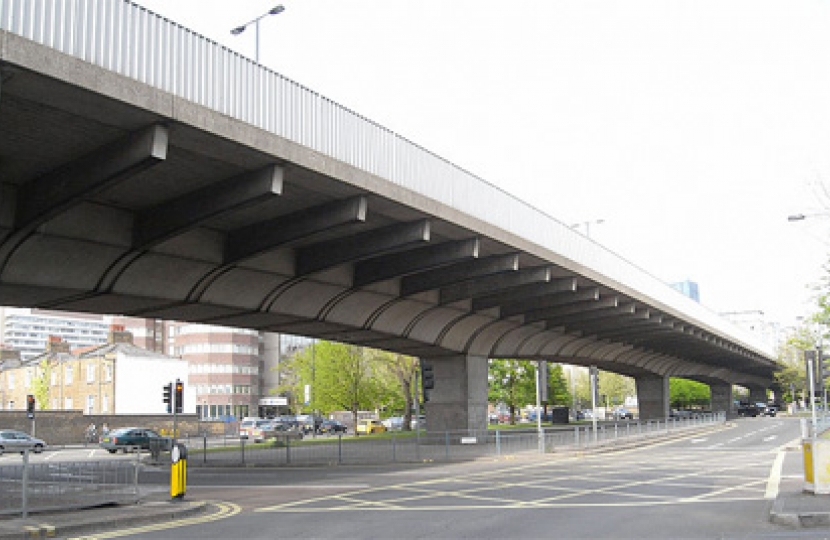 Residents will have the chance to put questions to TfL’s director of public affairs and stakeholder engagement, David McNeill, about the road. Cllr Nick Botterill, Deputy Leader of H&F Council, will also be there.

The meeting is open to all residents in the area, including Fulham and Chelsea residents concerned with the closure. It has been organised by Chiswick Conservative M.P. Mary Macleod, generating a remarkable complaint in the House of Commons from Hammersmith’s Labour M.P., who had failed to organise any meeting of his own. Mary Macleod said that her Labour neighbour was trying to “threaten, intimidate and bully me” simply for having organised a meeting to which he and other local M.P.s were invited.

The meeting comes as TfL partially reopens the bridge to light traffic, and says it continues to work around the clock to fully reopen the bridge to all traffic within the next four months.

Mayor of London Boris Johnson visited the structure recently to inspect the ailing flyover, and Hammersmith & Fulham Council is continuing to call for the repair works to be completed as soon as is safely possible and for planning on a longer term replacement to the flyover to start immediately.

Secretary of State for Transport, Justine Greening M.P., is meeting with the council on Friday, January 13 to discuss the situation.

Chelsea and Fulham M.P. Greg Hands said: “It is good that thanks to the Council, Boris and the Government working together, we are seeing some good progress on the Flyover re-opening. Meanwhile, I am shocked, but not surprised that the Hammersmith M.P., instead of working with his neighbours for the common good, has threatened to sabotage the Chiswick M.P.’s open meeting. I hope we can all work together on this.”

Cllr Nick Botterill said: "Progress needs to be fast and the problem must be solved as soon as possible.

“This closure has not only been terrible for H&F, but also for the whole of London. This is one of the capital's busiest roads, with 90,000 vehicles passing over it every day, and the closure is causing traffic chaos, far and wide.

“The repair works may not be a long-term solution to prolong the life of this 50-year-old structure and we need to plan in earnest for the future. Local people and H&F Council need to be at the heart of any future plans for a replacement, being central to the decision making process right from the start.

"We simply cannot leave such a vital part of our economy vulnerable again and need a fool-proof scheme."