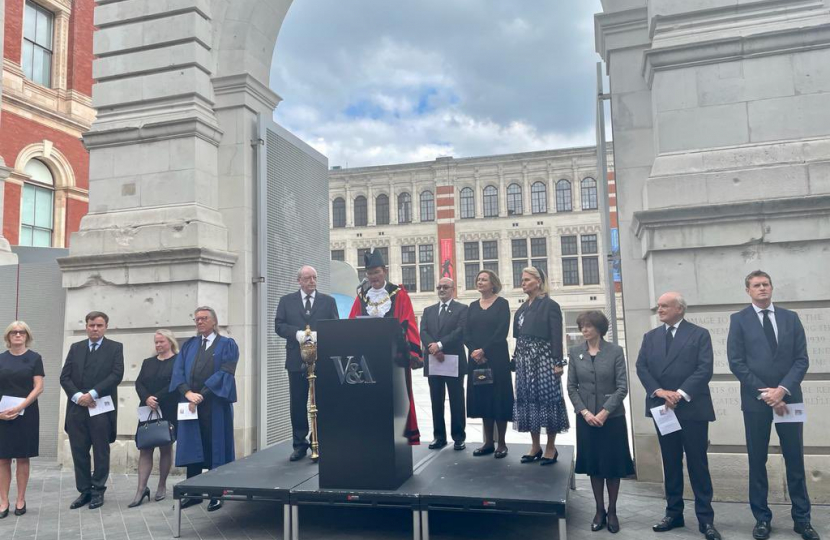 Since the news of Her Majesty Queen Elizabeth II's passing broke last Thursday, Members of Parliament have paid tribute to The Queen in the House of Commons.

You can watch my tribute in full here.

Away from the House of Commons, the Accession Council met at St James’s Palace to proclaim His Majesty Charles III our new King.

Subsequently, our new King's proclamation has been announced at events across the UK, including two locally at the Victoria & Albert Museum and Ravenscourt Park. The King has also been presented with addresses by both Houses of Parliament, a memorable occasion which I witnessed in Westminster Hall.

I have also attended several commemoration services for Her Majesty including Parliament's Evensong at St Margaret’s Church and a service at the veterans charity Sir Oswald Stoll Foundation in Fulham. In addition, I visited Fulham Baptist Church and Chelsea Old Town Hall to sign books of condolence.

Her Majesty made her final journey from Balmoral to London ahead of her funeral on Monday. As her coffin reached the Palace of Westminster, I was honoured to be part of the reception party and pay my respects. I will never forget this historic moment.

You may be reading this whilst queuing to see The Queen Lying-In-State, or planning to line the streets on Monday to witness her State Funeral. Below you will find some of the most up-to-date advice and guidance. I hope you find it of use.

God Save The King!