Labour refuse to back campaign to stop Super Sewer threat 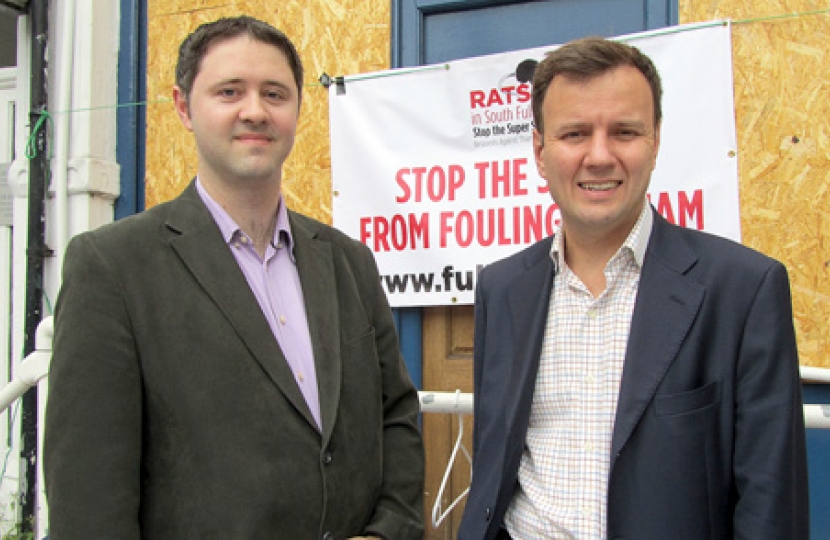 In an extraordinary move this week, Labour Party Councillors in Hammersmith & Fulham refused to vote in favour of challenging Thames Water's proposals to turn Sands End into an eight year construction site.

Whilst Conservative Sands End Councillors delivered speeches attacking Thames Water's proposed use of Carnwath Road as a decade long construction site, as well as pointing out the flaws in the scheme that will not solve problems of overflows or local flooding, Labour politicians seemed to act as spokesmen for Thames Water.  Not only did they ask the council to support the 'Super Sewer' project in principle, to the shock of Sands End residents in the public gallery they then refused to vote to back the Conservative Administration in fighting Thames Water's plans.

Whilst Labour are playing politics, Greg Hands M.P. has been busy standing up for Sands End residents.  This week he questioned Environment Minister Richard Benyon in the House of Commons on the ever rising cost of the Thames Tideway Tunnel scheme.  Currently estimated to be £3.6 billion, the 'Super Sewer' will cost every Thames Water bill payer £65 a year.  Greg was assured that the cost of any scheme to meet the European Union's instructions to Britain on the treatment of waste water was at the forefront of discussions with Thames Water.

Greg, along with Hammersmith & Fulham Conservative Council has absolutely opposed to Carnwath Road being used as a construction site for Thames Water's scheme – and are backing local residents action group RATS (Residents Against Thames Sewer).  If you haven't already signed their petition to save Carnwath Road and the Sands End area, you can do so here: http://www.ipetitions.com/petition/stop-the-stink/.