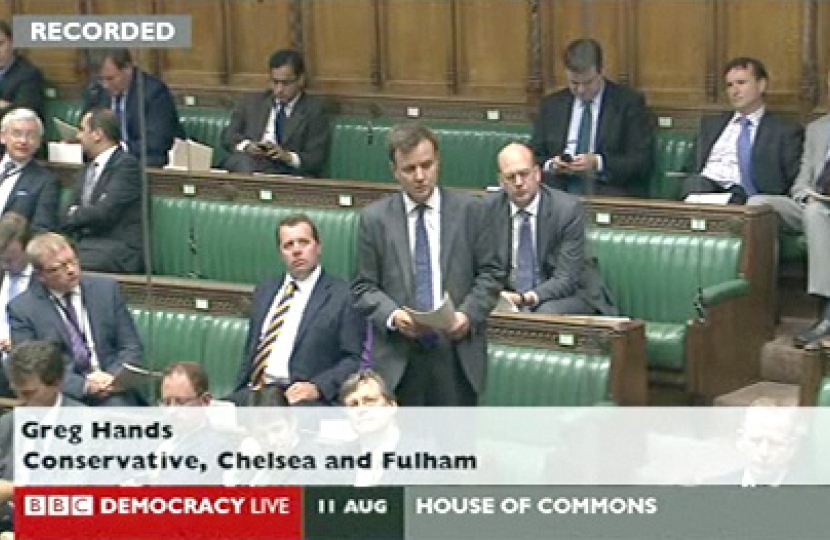 Greg Hands MP has welcomed a package of measures that will help Londoners affected by riots to get back on their feet with financial support for residents and businesses.

As part of concerted, cross-Government action to help open up shops, rebuild damaged buildings, and make sure people who lost their homes are re-housed, Local Government Secretary Eric Pickles announced a package of support including:

Mr Pickles also signalled to councils that the Government stands fully behind councils seeking to evict tenants that are found to have taken part in the looting and rioting across the country in recent days – this will send a strong message that crime does not pay.

Greg Hands MP said: “The Government is standing side-by-side with Londoners as they rebuild their lives. This assistance, combined with the Mayor of London’s £50 million fund, will make a real difference.

“I am also fully behind the efforts of our local councils to evict any tenant found to have taken part in the disorder. Those who riot or loot must face the consequences.”

Greg Hands M.P.'s question to the PM after riots statement:

Greg Hands (Chelsea and Fulham, Conservative): My constituents have also been victims of some of the disorder in recent days and strongly welcome the much tougher policing that has been launched since Monday night. The Prime Minister mentioned Bill Bratton, who has done such fantastic work in reducing crime in Boston, New York and Los Angeles. Can he mention some of the things that we might be able to learn from the excellent beat and street policing that has been used in many cities in the United States for the past 17 years?

David Cameron (Prime Minister; Witney, Conservative): This work that is done in the United States is also done in the United Kingdom. One thing we can do is just work harder to map and understand how many gangs there are, what their membership is and what they are doing so that we have better intelligence, but I am sure that there will be many things I can discuss with Bill Bratton when he comes to meet me shortly.