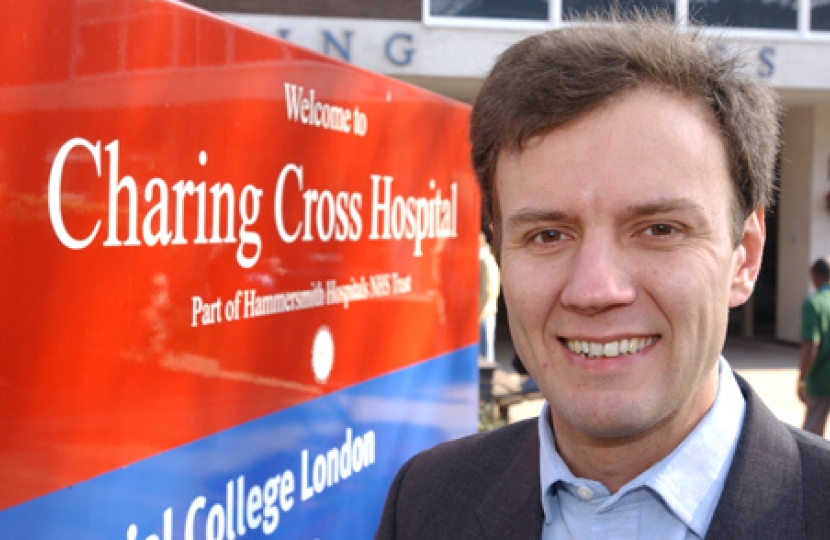 Greg Hands M.P. is urging local residents to join the fight to save Charing Cross hospital on Fulham Palace Road. Under proposals published yesterday, both the Accident and Emergency department and other critical services would be lost.

NHS North West London proposes closing four of the nine A&E centres in the area and downgrading some hospitals, including Charing Cross, from ‘major’ centres with a wide range of clinical specialisms to ‘local’ hospitals. The NHS preferred option could also see the loss of the hyper-acute stroke unit at Charing Cross.

Hammersmith & Fulham Council has launched an online petition which you can sign here.

Responding to the announcement, Fulham & Chelsea’s M.P., Greg Hands, said: “I have been warning since 2005 that NHS bureaucrats have been downgrading services at the Charing Cross, and now their renewed proposal to end A&E services comes as a hammer blow to Hammersmith & Fulham residents.

“This is also bad news for Kensington & Chelsea residents, as it is not clear that Chelsea & Westminster hospital will have the capacity to take up to an extra 100,000 A&E admissions each year.

“All together, this is a crazy proposal from a body of NHS bureaucrats – the North West London Strategic Health Authority – that is about to be abolished anyway. I will fight this very hard.”

Cllr Marcus Ginn, Cabinet Member for Community Care at H&F, said: "This confirms our worst fears. We will be fighting tooth and nail to save Charing Cross – the public are not going to accept this plan quietly, especially when the case for stripping all the major service out of such a well loved and respected centre of excellence is not supported by evidence.

"Over many months of questioning on this, NHS bureaucrats have failed to address concerns that this will leave thousands of residents dangerously distant from emergency care or to show that lives will not be put at risk by these closures.

"We think it is madness that they have not taken account of the fact that only Charing Cross has the space for expansion and the public transport links that a major hospital requires.

"They have not taken account of the thousands on new homes being built in west London which will mean we need more local access to hospitals, not less.

"We have warned them not to go down this path. The public reaction is going to be immense."