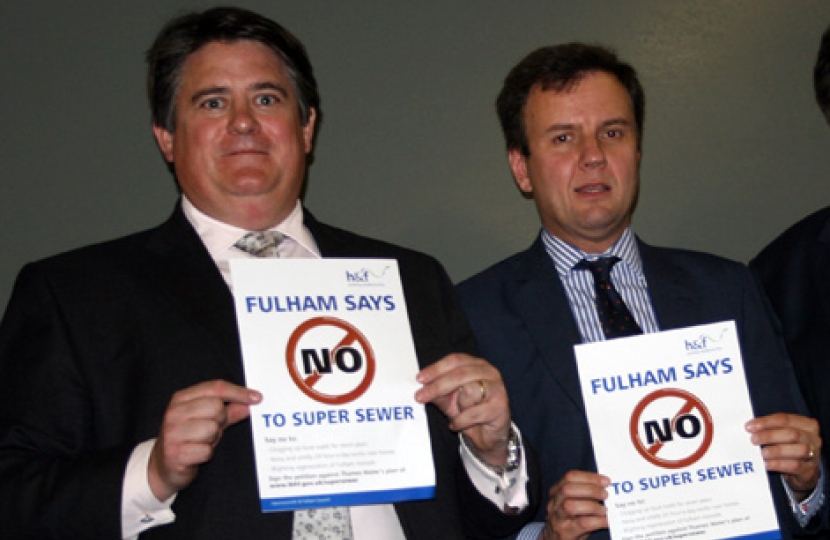 Greg Hands M.P. has spoken up for Fulham residents, who are furious at Thames Water’s proposal to bore a giant Super Sewer ‘drive shaft’ in the midst of their tight-knit residential community.

At the launch event for their ‘second phase’ consultation, he told Thames Water bosses that they had made the “wrong choice” in picking a residential site. He said afterwards that one battle had been lost but “the war is not over”. Thames Water’s new proposals see Fulham’s Carnwath Road replace Richmond’s Barn Elms as the preferred site for excavating the controversial Thames Tunnel.

Local campaigners have vowed to fight the proposal and two groups – Residents Against the Sewer in Fulham (RATSF) and Peterborough Road & Area Residents Association (PRARA) – have joined forces to campaign to get Thames Water to reverse the decision in time for the final selection deadline, which is expected next spring.

The groups have accused Thames Water of caving in to pressure to choose a residential rather than a ‘greenfield’ site. It is a choice which is set to inflame anger in south Fulham and will inevitably lead to protests, as the site is within a 440 yard radius of nearly 1,000 family homes, and is close to a number of local schools.

The massive Super Sewer is being promoted by Thames Water as the best solution to making the river cleaner, despite water industry experts coming forward to say there are cheaper and greener alternatives.

Earlier this week, the Selborne Commission – an independent study sponsored by five London councils, including Hammersmith & Fulham – announced that a “shorter tunnel, combined with green infrastructure solutions that are built up incrementally in the medium to long term, would be both compliant with EU directives and less costly and disruptive to Londoners.”

Greg Hands M.P. said: “The news that Thames Water now prefers Carnwath Road for the entrance for the main tunnelling shaft will come as a devastating blow to the whole Fulham community, particularly to those thousands of people living in the immediate vicinity. This will be a giant construction site, the size of six football pitches, close to seven local schools, all for a scheme of highly questionable merit.

“This is not a final decision, however, and I will continue to fight for an alternative to be found to sewerage problems in the Thames. We have lost this significant battle, but the war is not over on this.”

Cllr Stephen Greenhalgh, H&F Council Leader, said: "It is ludicrous that a densely packed residential community has been selected as the main drive site for Thames Water’s massive super sewer when industry experts are lining up to say there are cheaper and greener alternatives to clean up the river. Blighting the lives of thousands of Fulham residents, threatening homes, jobs and local schools - not to mention the disruption on our roads - for six years is outrageous. We will continue to defend residents' and water bill payers' interests by highlighting the sensible alternatives to cleaning up the Thames that do exist."

In a double whammy of bad news, it was also admitted that the cost of the massive concrete tunnel is now expected to reach £4.1billion. More than 14 million Thames Water customers, from Swindon to Essex, now face water bills rising by at least £70-80 per year to pay for the project.