Hands joins campaigners in Downing Street to save Royal Brompton 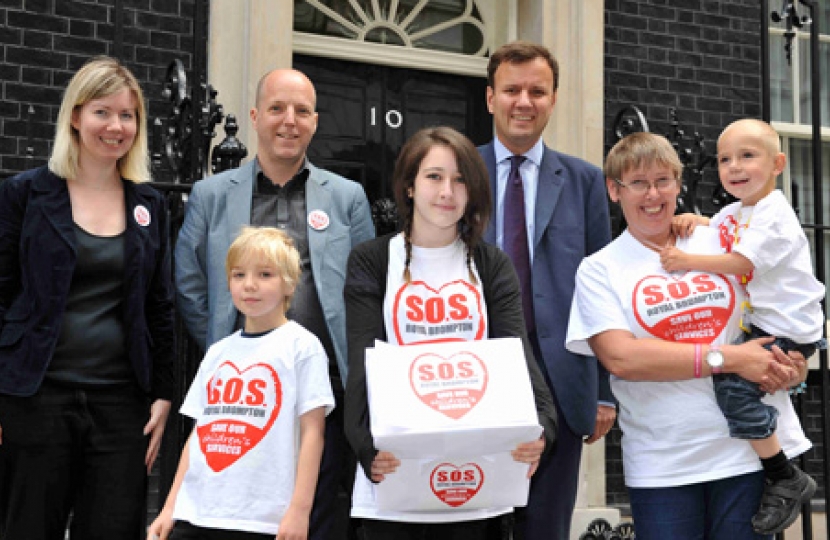 Greg Hands M.P. joined children and parents who have experienced the care of the Royal Brompton in Downing Street last week to present a 35,000 strong petition to save children's heart surgery at the hospital.

As the petition was handed in, Health Minister Simon Burns indicated that the Government would be taking a more flexible approach, giving hope to the campaign to keep services at the Royal Brompton.

Simon Burns said: "The consultation literature specifically asks consultees for their views on how many centres it is best to have in London, two or three.

"If they agree that two is optimal, they are asked to state which two they prefer, including the Royal Brompton.

"Although the Royal Brompton has not been included in any of the four proposed scenarios for child surgery units, people who are taking part in the consultation process can argue its case.

"The review remains flexible and open-minded as to the final number, and is happy to listen to all options."

Greg said: "Royal Brompton is recognised as a centre of excellence that has pioneered many life-saving techniques.

"I have been overwhelmed by the concerns raised by parents and families who cannot understand why NHS managers are proposing to destroy a world class service that has transformed many thousands of lives.

"I hope that they will listen to people's concerns now."

The Safe and Sustainable review consultation closes on July 1, after which a decision on the unit will be made.