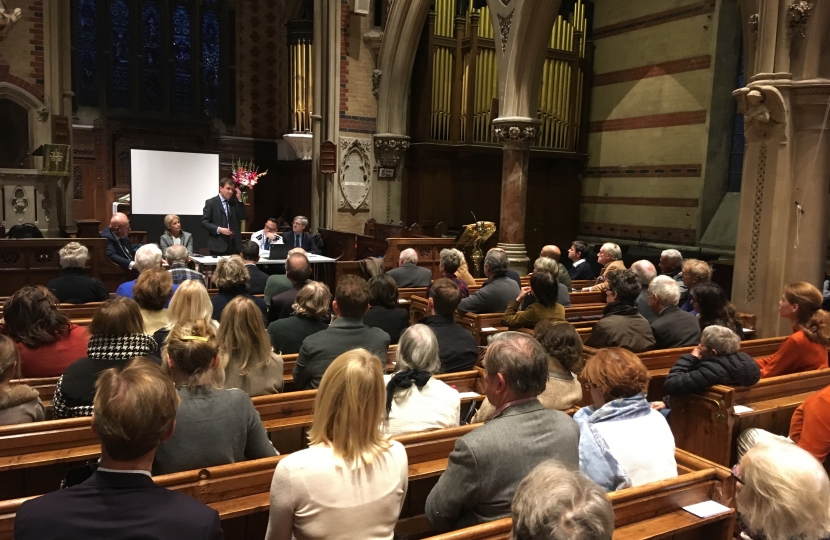 On Thursday 3rd October, I hosted a policing and crime public meeting at St Simon Zelotes Church, Chelsea. This meeting followed a similar one that I organised earlier this year in Fulham Broadway.

It was useful to be updated of the measures being taken by RBKC to combat crime locally. £4 million has been allocated to a range of preventative measures, including 16 mobile CCTV cameras and £1 million on youth community projects designed to deter gang-related violence. Cllrs Gerard Hargreaves and Sof McVeigh encouraged the establishment and growth of Residents Associations, which have so far proved extremely valuable in combatting local crime. In both Redcliffe and Chelsea Riverside wards, for example, local neighbourhood schemes have been instrumental in informing police on moped-related crime. Local moped thefts have declined by 53% over the past year due to a range of new Police tactics, including pursuit cars physically taking out mopeds, the use of DNA spray, and Police scorpion units on ‘scrambler’ motorbikes as part of Operation Venice.

The public meeting was held close to the site of the Moore Street SuperCar crash in August, in which 11 parked vehicles were destroyed, causing hundreds of thousands of pounds worth of damage. It is lucky that no one was killed. Whilst the problem is not limited to Gulf-plated cars, I am continuing to implore the Arab embassies to play more of a proactive role in tackling the highly anti-social, and potentially fatal, issue of SuperCars. I have also separately written to the Secretary of State for Transport requesting that Sloane Street be included in the Government’s new acoustic noise camera trial. I am open minded as to how I can lobby further on this issue, including lobbying for tougher rules on compounding the offending cars.

In response to a question on recruitment, Chief Inspector Simon Brooker outlined the 30 plus retention scheme, whereby retired Police Officers are invited back into service. Unfortunately, the uptake for this scheme has not been particularly effective. However, Inspector Mark Lawrence talked about the new aggressive recruitment drive currently being undertaken by the Met Police. 300-400 new officers are currently going through the recruitment centre in Hendon every month, and it is expected that by the end of December, the total number of officers in London will exceed 31,000.

There was clear concern at the meeting about anti-social behaviour locally, as well as the targeting of individuals for their jewellery, mobile phones, and wristwatches. In Lennox Gardens last month, for example, a non-fatal stabbing occurred in pursuit of the victim’s wristwatch. More frontline Police Officers are needed on street patrols and that is why I have written to Sadiq Khan, who has strategic oversight of the Met Police as Chair of MOPAC, to specifically request additional officers for Chelsea and Fulham, as part of the Government’s recent announcement of 20,000 new officers nationally.

I welcome the announcement last week that the number of Police officers in possession of a taser in London is set to exceed 10,000. Whilst controversial, I believe tasers are a vital tool for the Police in tackling crime, along with body-worn cameras and expanded stop-and-search measures. Earlier this year, the former Home Secretary Sajid Javid announced that more junior Police Officers in London will be permitted to carry out stop-and search without approval from a senior officer. Cumulatively, these are vital tools to tackle the scourge of knife crime, which has risen sharply in London over the past three years.

The new Borough Command Unit model has been set up in part to improve responses for victims. From the correspondence I have received, it is clear that there is frustration from many residents regarding the follow-up to incidents of crime. The Police in attendance made it clear that they are working very hard to improve their responses to criminal incidents and the subsequent investigations. More Police Officers will help in achieving this objective.

Thank you to all the residents who took time to attend the public meeting. I was pleased to be joined on the panel by senior Met Police Officers Inspector Mark Lawrence and Chief Inspector Simon Brooker from Central West Borough Command Unit (BCU), which covers Chelsea and Fulham. I am also grateful to Tony Devenish AM (GLA Member for West Central), RBKC Councillors Gerard Hargreaves (Lead Member for Community Safety) and Sof McVeigh (Brompton and Hans Town) for being on the panel and answering questions.

I look forward to updating you further on these issues in the coming weeks and months.