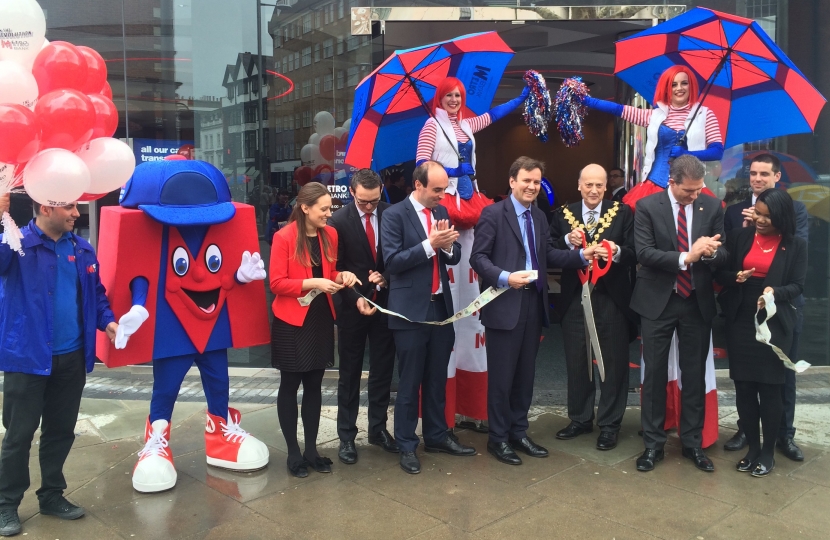 On Friday, 15 April, Member of Parliament for Chelsea & Fulham, Greg Hands, took part in the Grand Opening celebrations of the new Metro Bank branch at 234 King’s Road, Chelsea, SW3 5UA. This is the second branch in Greg’s constituency – he visited the Fulham Broadway branch last year – and it is the forty-first branch in total. Greg was pleased to see that Shemar, whom he met on his last visit, is now working at the new branch.

As a community bank, Metro Bank prides itself on being passionate about creating local jobs. This new branch on the King’s Road has employed about 25 local residents, with the potential to employ another 50. The team is led by Carl Maw, Store Manager, and Adam Johnson, Local Director.

Metro Bank launched in July 2010 with a focus on providing unparalleled levels of service and convenience to customers – testament in its early until late, seven day store opening. Unlike any other bank in the UK, Metro Bank provides free coin counting for customers and non-customers with Metro Bank Magic Money Machines, instant printing and replacements for lost or stolen debit cards, and safe deposit boxes for customers’ valuables.

The bank is supported by the most advanced technology to give customers an excellent service across any channel they choose to use for their banking, be it in store, via the 24 hour local contact centre manned by people not machines, online banking or through the personal innovative mobile app.

All Metro Bank stores aim to be open at the most convenient time for local residents and businesses: 8am – 8pm Monday to Friday; 8am – 6pm Saturday; and 11am – 5pm Sundays and bank holidays; 362 days a year.

Kevin Barrett, Regional Director of Metro Bank, said: “We are excited to move onto The King’s Road and become a part of this vibrant local community. This is a great year for Metro Bank, listing on the London Stock Exchange with a market value of £1.6bn, less than six years after launching. But despite our rapid growth, our goals remain the same: to deliver unparalleled customer service. Thousands of people have joined us for the levels of service and convenience that we offer, and we’re thrilled to be able to bring a true banking alternative to the Chelsea community. We look forward to welcoming personal and business customers on our journey as we revolutionise UK banking.”

Speaking after opening the new branch, Member of Parliament for Chelsea & Fulham, Greg Hands, said: “Metro Bank really put on a show for the Grand Opening celebrations of their new branch on the King’s Road, with music, stilt-walkers, balloons, and popcorn. It’s great to hear that Metro Bank has employed more than 20 local residents, with the potential to employ 50 more; and it’s reassuring to hear that they are carrying on educating young people about the importance of responsible banking.”