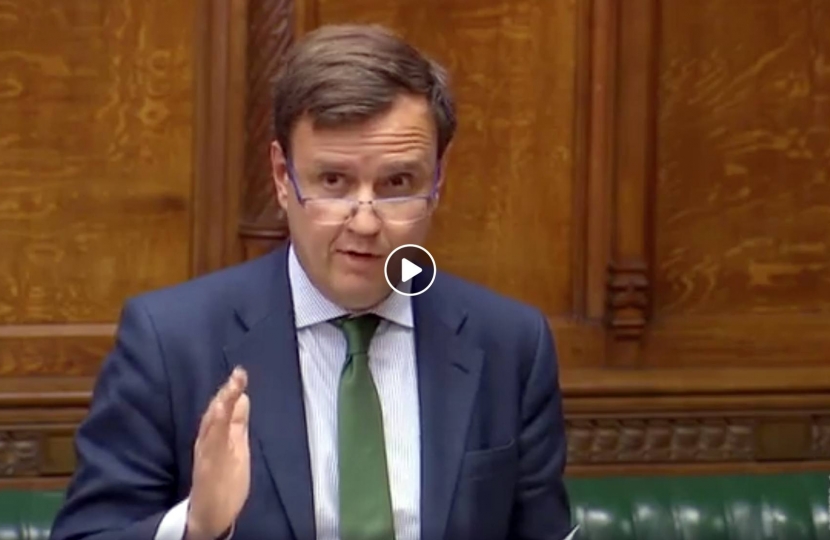 Greg Hands (Chelsea and Fulham) (Con): I rise to oppose this national policy statement, which is why I resigned from the Government. I did not resign willingly; I greatly enjoyed my seven years in the Government. I spent four years in the Government Whips Office, keeping the show on the road during those difficult coalition years; I carried out the 2015 spending review—controversial in places—which is now bearing fruit as we see the deficit at a record low; and I was at the very foundation of the Department for International Trade to help the Secretary of State for International Trade to make the crucial preparations for having our own independent trade policy for the first time in 45 years. But I am also surprised to be resigning from the Government as I had always been led to believe that the decision on this issue would be a free vote.

I always knew, however, that I would vote against this proposal. At the 2017 general election I made two unequivocal pledges:

“Greg will be voting against the proposal when it comes before Parliament, expected later this year”,

“Greg is against Heathrow’s 3rd runway and will vote against it, in Parliament.”

So for me, this is not just a debate about Heathrow, important though that is; it is also about being true to one’s word and to one’s election pledges.

Regrettably, this is a truncated debate, but I am joined by several right hon. and hon. Friends who have similar views about Heathrow, including my right hon. Friend the Member for Putney (Justine Greening) and my hon. Friends the Members for Richmond Park (Zac Goldsmith) and for Windsor (Adam Afriyie), and I know that they will make a lot of important points. I have three points to make, briefly. The first is about the impact on the environment in an urban London context; the second is about whether a large hub airport is in the nation’s interests, and the arguments about London’s connectivity; and the third is on night flights and the need to remove this wholly unnecessary stain on the liveability of our great capital city.

On London’s precious urban environment, Heathrow already exceeds legal pollution limits, before any single plane has landed at the third runway. Heathrow is seeking to have an extra 28 million passengers visit the airport each year, but somehow without a single extra ​car journey. Furthermore, Heathrow has not yet identified the future flight paths, so it is impossible to tell who and where will be affected by this big increase in flights. An awful lot of Londoners currently have no idea that they will be overflown by planes every 90 seconds.

Zac Goldsmith: I salute my right hon. Friend’s principles on this issue. Does he agree that the lack of information on where the new flight paths will go makes an absolute mockery of all the consultations that have been doing the rounds over the past couple of years?

Greg Hands: I wholly agree with my hon. Friend. It is perfectly possible to show where the flight paths are going to be or are likely to be. I conducted my own consultation, because both Heathrow and the Department for Transport initially refused to do a consultation in my Chelsea and Fulham constituency. I eventually had them come to the constituency, but even then they were unwilling to provide such basic information.

The pledge to build a freight hub is absolute madness when we already have excellent freight hubs that are well away from population centres, such as those at East Midlands airport and Stansted. Surely freight hubs should be created away from population centres, not in the middle of urban environments. The Secretary of State’s argument centres on this essential proposition: that the UK needs a hub airport—and by implication only one—to compete. I fundamentally disagree. A hub airport suits Heathrow and it suits the British Airways’ business models, but those are not the same as the national interest.

Most hub airports tend to be in medium-sized cities, and there is a reason for that. I fundamentally believe that London is best served by its five airports. It is about the difference between a city of 8 million to 10 million people and a city with a population of 1 million, 2 million or 3 million. New York has three large airports, as does Moscow, and Tokyo has two large hub airports. Most successful hub airports are in medium-sized cities. The Secretary of State gave the examples of Frankfurt and Amsterdam on Conservative Homethis morning, but those are both cities with a population of fewer than 1 million. They cannot generate that level of traffic themselves, so they need to hub to create and boost their connectivity. It is not a choice for them; it is a choice for London.

Why should London prefer a set of orbital airports? The answer returns to the question of the size of London, with its 8 million, and growing, population. Travel times across London to one hub airport will very often exceed the two-hour median flight time. That is why, while Amsterdam and Frankfurt need a hub, London needs a set of orbital airports.

The related question is on connectivity, and it is not just about Heathrow but about London’s airports as a whole. Much has been made of Frankfurt and Amsterdam overtaking Heathrow in respect of connectivity, but that misses the point. What about the whole nation’s connectivity? And Heathrow is actually already pretty well connected. It may surprise people to know that 10 Chinese cities—Beijing, Shanghai, Changsha, Chongqing, Guangzhou, Hong Kong, Qingdao, Sanya, Wuhan and Xian—are currently connected directly to ​Heathrow each day. And to London as a whole, 28 US cities are connected to London airports, along with 13 Polish cities, seven in India and eight in Canada—more than either Frankfurt or Amsterdam. The growth of destinations served by London airports has been huge, and they have been point-to-point flights. The direction of modern aviation is towards point-to-point direct flights.

Justine Greening: My right hon. Friend is making important points. We have just seen the very first non-stop direct flight from Sydney to London. Does he agree that there is no reason for people to want to hub unnecessarily, and that it is therefore wrong to have a 20th century hub strategy instead of a 21st century direct strategy?

Greg Hands: My right hon. Friend makes a very important point about the introduction of the first point-to-point flight from Australia to London. It returns to my point about what is in not just my constituency’s interests but London’s interests as a whole and the national interest. Creating the super-hub at Heathrow clearly suits the interests of British Airways and of Heathrow. I have nothing against that. I am a Conservative and have nothing against companies doing well, but we should not equate that with the national interest.

I promised to say a few words about night flights.

Liam Byrne (Birmingham, Hodge Hill) (Lab): I respect the position in which the right hon. Gentleman finds himself. Birmingham airport could take 17 million extra flights now on the existing infrastructure, and that capacity could be unlocked if we built the high-speed loop that was originally proposed. The cost of that loop would be about half that proposed for the new runway at Heathrow. Should we not look again at using high-speed rail to unlock capacity we already have rather than bring forward a proposal that will drain 43,000 flights from our airport?

Greg Hands: I thank the right hon. Gentleman for that intervention. I support high-speed rail. With regard to the sort of solutions that one could come up with with the money being spent here, I certainly think that that is probably an example of the sort of thing that could increase the UK’s connectivity as a whole.

On night flights, the situation is untenable. There are allowed to be up to 16 flights each night, starting from 4.30 am. I hear these planes at 4.30. I frequently receive letters about them from my constituents. One can almost time the first flight coming over at 4.30. This is done in the interests of a few thousand people. These are important people travelling from the far east to this country to do business; nevertheless, we are talking about a few thousand people measured against the convenience of many hundreds of thousands of people living directly under those flight paths, many of whom are some of the most economically productive people in this country, paying a lot of taxation. We should not ignore their interests. We need to ban night flights—6 am is early enough. Even if this proposal is to be adopted, the minimum quid pro quo should be the abolition of all arrivals before 6 am. We definitely do not want this stealthy smoothing.

I have just outlined a few of the arguments against this policy statement. The proposal is fundamentally flawed, but this vote is also about integrity and about ​the pledges that we make to our electors. It is to be regretted that we will not now have a free vote, but I urge colleagues to vote against the proposal tonight.