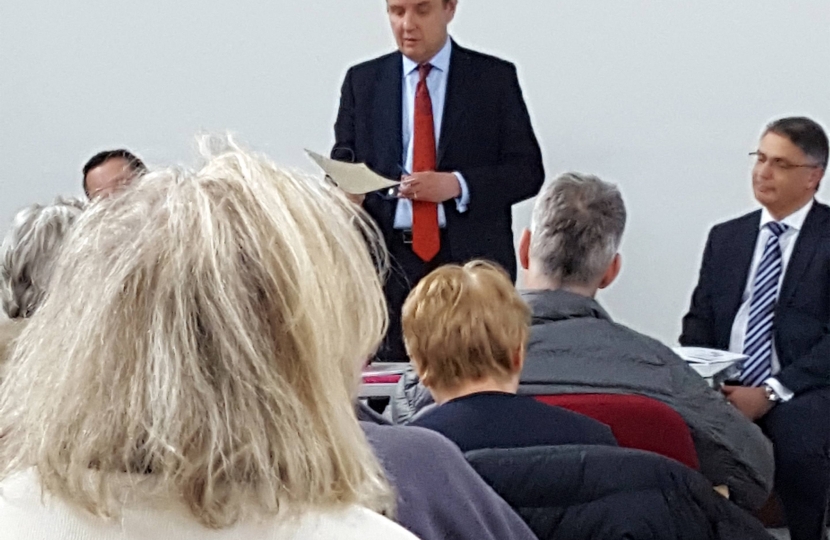 Heathrow Airport has been holding public consultation events across London and much further afield in the Home Counties, on their proposals for a third runway and on the management of the airspace over the South East of England. However, Heathrow had not organised an event in the Chelsea & Fulham constituency, despite the massive impact that aircraft noise has on local residents’ daily lives.

On Friday, 23 March, Greg Hands held an additional consultation event for his constituents to allow them to obtain information from representatives of Heathrow Airport and then get their views heard both in person and formally as part of the consultation. So many people from both Fulham and Chelsea attended, and so many had questions to ask, that the event had to be extended by half an hour.

Speakers were from Heathrow Airport and from NATS, the National Air Traffic Control Service, as well as Greg himself.

Local residents’ questions covered the current westerly preference, the impact of aircraft noise on family and work life, the hope for a comprehensive ban on night flights, the methodology of noise measurement, and aviation policy in general. The general opinion expressed was that aircraft noise has a massive impact on residents of Fulham and Chelsea, but that those residents feel forgotten by public consultations and the methodology behind these consultations.

Commenting on this additional Heathrow Airport consultation event, the organiser and local MP, Greg Hands, said: “I am glad that so many of my constituents were able to attend this Heathrow consultation event to get their views heard. As a resident of Fulham for more than twenty-five years, I know all too well that the proposed expansion of Heathrow Airport is a disappointing prospect for many of my constituents.

“I remain opposed to the prospect of a third runway at Heathrow, and I will continue campaigning for a ban on night flights for more than a decade. I am writing to Heathrow Airport and to the Department for Transport to convey the sentiments of this event and to raise important points that may improve matters for my constituents in Fulham and Chelsea.”