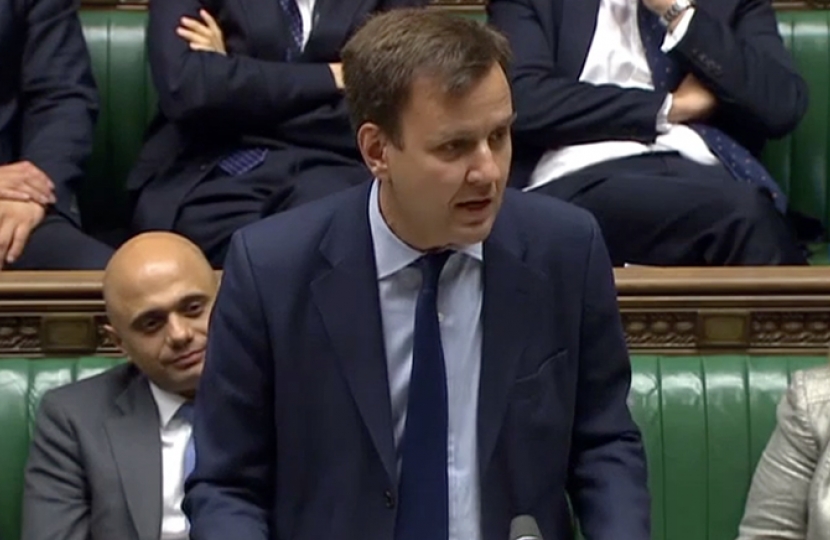 Greg Hands MP addressed the House of Commons and concluded the debate on the Summer Budget.

On 14 July, in his role as Chief Secretary to the Treasury, Greg Hands had the honour of concluding the debate on this year’s landmark Budget. Greg had already made a large contribution to the Budget in the run up to the commanding opening speech delivered by his colleague in Her Majesty’s Treasury, Chancellor of the Exchequer George Osborne.

Greg Hands addressed the House of Commons at the despatch Box as the first Conservative Chief Secretary to the Treasury for the first Conservative-only Government since 1997. Among the profound changes heralded by this year’s General Election, Greg reminded the House that over the past five years the second day of the Budget had witnessed exchanges between Labour’s Ed Balls and the Liberal Democrats’ Vince Cable, but both of them lost their seats to the Conservatives on 7 May this year. On a related note, Greg took the opportunity to congratulate the five new Members who made their maiden speeches that day.

Greg Hands says, “It was my great honour to conclude this Budget which gives Britain a pay rise, and cuts taxes for 29 million people; a budget which protects our national security, and gives Britain the security of living within its means.

“Perhaps unsurprisingly, the Labour Party’s response to this historic Budget shows that it has learnt nothing from its defeat right across the United Kingdom on 7 May. Labour is starting this Parliament just as it started the last one: incoherent, in disarray, denying the deficit, and failing to apologise for its past mistakes.

“The voting public no longer believes in the Labour Party’s economic credibility, which is one reason why their shadow Chancellor and half their shadow Treasury team were voted out at the General Election. If the last Labour government did not spend too much, then how come there was no money left for my predecessor as Chief Secretary to the Treasury?

“It falls to this Conservative majority Government to take the tough decisions and safeguard our economy for the long term so that future generations will not be left to clear up a mess similar to that left by the last Labour government. In spite of these tough choices, this Conservative Summer Budget is still able to announce a new national living wage, £10 billion of extra investment in the NHS, and an assurance that the UK will meet its NATO defence commitments.

“This has been a landmark Budget, which seeks to deliver for the entire country a bright and prosperous future.”

The full text of Greg's speech was as follows:

We have had a good debate. Indeed, we have had four good days of debate. For me, the most remarkable parts were the commanding speech from my right hon. Friend the Chancellor on day one and the real passion from my right hon. Friend the Work and Pensions Secretary. Almost as remarkable were the opening exchanges on Thursday; for the last five years of the Budget, day two saw set pieces between Ed Balls and Vince Cable, but not this year, as we, the Conservatives, took both of their seats on 7 May.

Today we have had five high-quality maiden speeches from the three great nations of England, Scotland and Wales. It was a particular pleasure to hear from my constituency neighbour, my hon. Friend the Member for Kensington (Victoria Borwick). She made a marvellous maiden speech, with a great tribute to her predecessor Sir Malcolm Rifkind, who is actually my predecessor as well. We have another common predecessor; she told us how she appeared in the index of Alan Clark’s “Diaries” and the concern that had caused her husband.

Equally impressive was the maiden speech of the hon. Member for Paisley and Renfrewshire South (Mhairi Black), who spoke with great poise, engagement and passion, although I have to say that most of her speech seemed to be directed at the Labour party. She said that Labour had left her family, not the other way round. I congratulate her on a memorable maiden speech and on her first-class honours degree.

From Wales, we heard from my new colleague my hon. Friend the Member for Brecon and Radnorshire (Chris Davies). In what was a very entertaining speech he took us through his first day here—how he saw the mosaic of St David in the Central Lobby and his pride at being both Welsh and a Unionist, and how the Whips approached him sternly, with one Whip reminding him somewhat of his wife back home. I am wondering which member of the Whips Office that might have been. His speech was also peppered with references to all kinds of other battles and heroism.

Also from Scotland, we heard from the hon. Member for Airdrie and Shotts (Neil Gray). He made a very competent maiden speech and talked about life in Westminster and missing his family back in Scotland. I can tell him that that is not unique to those travelling from Scotland; it can happen to those of us who are MPs for London constituencies as well. He was generous about his predecessor, Pamela Nash, and talked about being the first Orcadian for 200 years to be an MP.

Again from Scotland, the hon. Member for Linlithgow and East Falkirk (Martyn Day) was generous to his predecessor, Michael Connarty, who I knew well and served under on the European Scrutiny Committee, and gave us a radical, passionate and humorous speech. I wish him well.

A number of other Members also contributed to the debate, but I will not go into their speeches in detail. I was struck, however, by the fact that, although some Labour Members raised interesting points, so many of their speeches sounded like they were cut and pasted directly from their election hustings speeches and showed no recognition of what had happened on 7 May or what happened last week.

Let me now conclude the Budget debate. This is the Budget that gives Britain a pay rise and that cuts taxes for 29 million people. It is the Budget that protects our national security and that gives Britain the security of living within its means. To be fair, not all Labour Members ignored the results of the election or the Budget last week. The acting Leader of the Opposition, the right hon. and learned Member for Camberwell and Peckham (Ms Harman)—[Hon. Members: “Where is she?”] That is a very good question. She might be in hiding. She reprimanded the shadow Health Secretary over the benefit cap, reminding him:

“You may have noticed that we lost the election”.

It is remarkable that he or anyone else could possibly have missed that fact. It is equally remarkable that she now appears to be on the right of her party. I do not think that she moved; I think the party has moved to the left. We have heard from the right hon. Member for Birkenhead (Frank Field), who is so enthusiastic about our new national living wage that he wants it to be brought forward and to start sooner. It is resoundingly clear from this Budget debate that Labour has made no progress in economic policy since May.

Geraint Davies: Is not this a Sheriff of Nottingham Budget? Is not the Chief Secretary to the Treasury robbing the poor by removing their tax credits and giving to the rich by increasing the inheritance tax threshold? This Budget stinks, and his grubby hands are all over it.

Greg Hands: There you have it, Madam Deputy Speaker. The hon. Gentleman’s remarks epitomise everything that we have all been suspecting about the Labour party over the past 10 weeks—namely, that it has learned nothing from its defeat right across the UK on 7 May. It looks as though it intends to start this Parliament as it started the last one: in disarray, denying the deficit and failing to apologise for its past mistakes.

The right hon. Member for Doncaster North (Edward Miliband) lost the election, and the turning point was surely that moment in the TV debate when he denied that the Labour Government had spent too much. If they had not spent too much, how come there was no money left? Labour’s economic credibility was so bad that, at the election, it even lost the constituency of its own shadow Chancellor as well as those of half its Treasury team.

There was one senior Labour figure who avoided losing his seat, but he did so only by standing down voluntarily. That was the last Labour Chancellor, Alistair Darling. He is reported to have said something very interesting the day after the Budget, which was that Labour was “in disarray” and that it was

“paying the price of not having a credible economic policy.”

He hit the nail on the head. Labour’s response to the Budget has been totally incoherent. Who would have thought that a Labour Opposition could attack a policy to bring the minimum wage for workers from £6.50 up to a national living wage of £9 in the course of a Parliament? I invite the other parties to consider their positions. By the way, only the Labour party could have a leadership crisis without actually having a leader. If Labour Members vote against the Budget in a few minutes’ time, they will be voting against a national living wage, against dealing with the deficit and against meeting the UK’s NATO defence commitments. They will also be voting against £10 billion of extra investment in the NHS.

This is not a Government who shy from the tough decisions. It is right that higher wages, not welfare subsidies, should raise the standard of living of working families. It is right that those with the broadest shoulders should bear the biggest burden. It is right that we should help and support our businesses to bring prosperity to this nation and it is right that we should build ourselves strong, stable and secure public finances. We are doing that. This has been a landmark Budget, delivering for the entire country for a bright and prosperous future. There are still tough choices ahead, but I commend the Budget to the House.