Greg backs Jeremy Hunt to be next Prime Minister 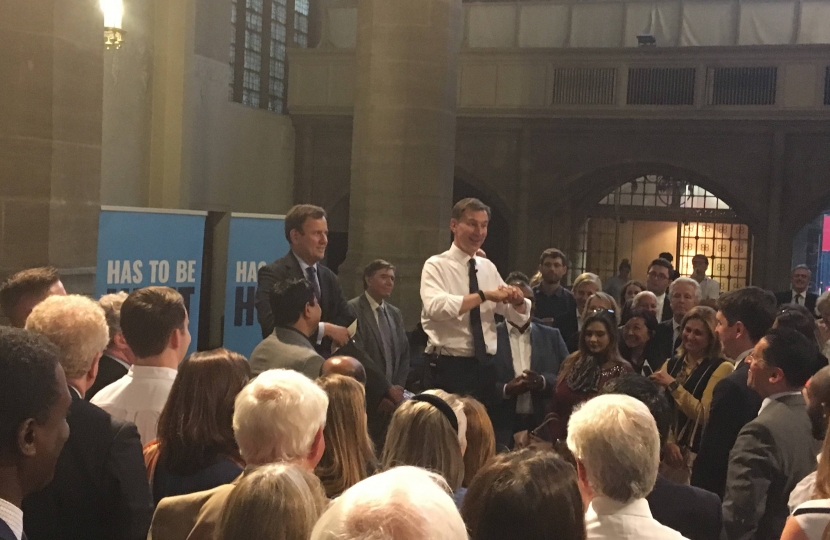 Greg is supporting the Foreign Secretary, Jeremy Hunt, to be the next leader of the Conservative Party and the next Prime Minister. Greg wrote about his reasons for supporting Jeremy Hunt in the following article, which was published in The Times on 4 June:

I cannot imagine a better Prime Minister than Jeremy Hunt

A momentous choice faces the 314 Conservative MPs and party members in the coming weeks: to elect not only a new leader of the party but a new prime minister. I have spent 14 years as an MP, seven of those as a government minister, and have worked with almost all the prospective candidates in government.

The new prime minister will face many immediate challenges, the most important of which is how to deliver on the democratic will of the British people to leave the European Union while not triggering an unwanted general election, the third in four years.

We need someone with the skill, diplomacy and tact to negotiate a sustainable arrangement for our departure from the European Union, but in a way that doesn’t deliver a Corbyn government. And we need someone with the vision to see beyond that. For me, there’s one person best equipped to do this — the foreign secretary, Jeremy Hunt.

I have known Jeremy since 1993, when he and I were involved in grassroots campaigning for the Hammersmith & Fulham Conservatives, leafletting in Sherbrooke Ward. Nobody could accuse Jeremy of needing to get to know the Conservative Party.

In politics, Jeremy has been passionately committed to making the case for Conservatism and seeking Conservative victories at all levels. In parliament, he has been one of the best communicators and has been an enthusiast in all his roles, from shadow minister for disability to shadow Culture Secretary. In government I have been at the cabinet table and watched Jeremy argue passionately for the NHS and saw his adroit handling of a succession of possible health crises, which never became crises thanks to him.

Yet beyond that, what most impresses me is his vision for Britain after Brexit. I served as trade minister and one thing I picked up quickly in that role is the pace of change in the developing world. Growth is rocketing, and as these economies become richer they tend to buy more services, an area in which Britain is probably the world leader. There’s a huge opportunity now for Britain outside the EU to lead a radical agenda on services trade liberalisation, using all our natural strengths to link us in to these markets.

When you hear Jeremy talk about this, you understand he truly gets it. He’s an internationalist — he may be the only parliamentarian who speaks more languages than me — and a hugely respected foreign secretary all around the world.

Yet his backstory is also testament to this: an entrepreneur who set up a business from scratch which is now a successful multinational employing hundreds of people. How do I know this? His company was founded in Hammersmith and is still based in my constituency.

He understands exactly how we’re going to win in these coming decades. He’s already spoken about slashing corporation tax, putting trade policy at the heart of our economic strategy and investing properly in our infrastructure, but there’s a depth and a coherence to his vision that makes it truly compelling.

There are many impressive candidates in the race and still a long way to run. Yet as we look at the challenges facing us ahead I couldn’t imagine a person better equipped to meet them than Jeremy Hunt.

Greg Hands is a Conservative MP

More details on Jeremy Hunt's campaign can be found at: https://jeremyhunt2019.co.uk/