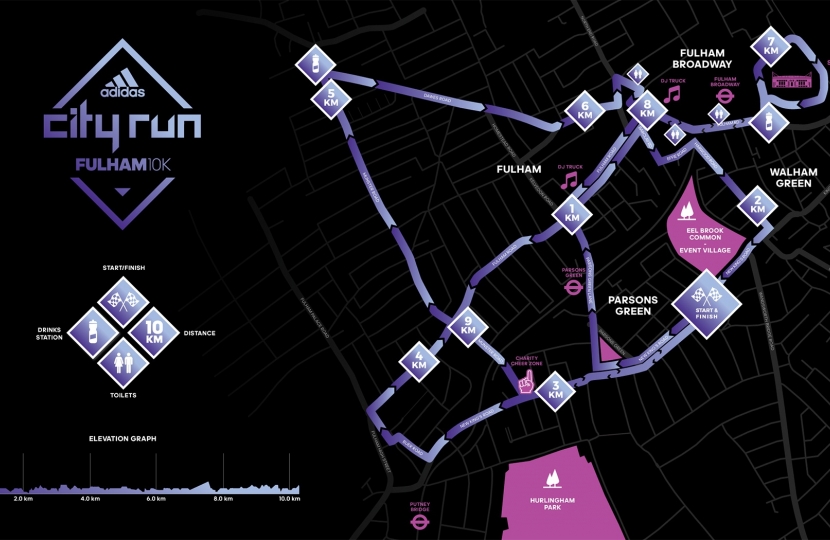 Roads across Fulham, including New Kings Road and Fulham Road will be closed to traffic for most of Sunday, 18 March for the Adidas City Run for a "mass participation running event".

The 10 km route for this Labour H&F Council-approved run - which one Fulham resident has described as "a map of hell on earth" will begin and end at Eel Brook Common, and will affect New Kings Road, Munster Road, Dawes Road, Harwood Road, Fulham Road, and Parsons Green Lane.

Local MP Greg Hands, who was surprised to hear of this "inaugural mass participation running event", not having been consulted on it, commented: "Even though the organisers claim that the route and road closure timings were carefully considered - including by the Labour H&F Council and Transport for London - and it is being organised for a good cause, these road closures will cause immense frustration and inconvenience for local residents.

A local resident took to Twitter and commented: "Closing Dawes Rd, Munster Rd and the bottom of Fulham Palace Rd will create gridlock. This is more disruptive than the cycling. Very happy that these events come to Fulham, they are great fun, but this route looks like a total nightmare."

Another SW6 resident described the consultation and route as: "Not a word. And I'm a runner and an SW6 resident. This is literally a map of hell on earth."