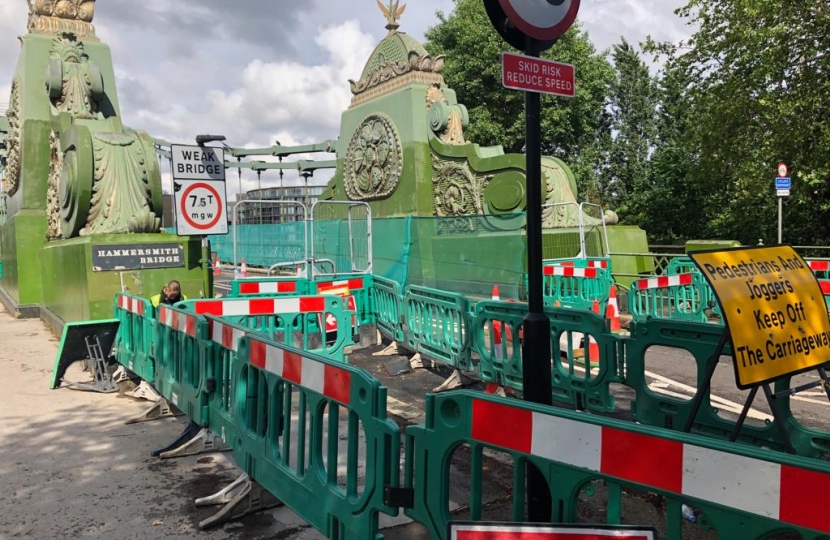 It is now over six months since Hammersmith Bridge was closed suddenly on 10th April, and Hammersmith & Fulham Council (LBH&F) and Transport for London (TfL) have made very slow progress in getting it fixed and reopened.

Five miles of the north bank of the River Thames is currently uncrossable by motor vehicles. This is an unprecedented situation for such a densely populated part of London. Although I have been denied access to air quality data for Fulham by LBHF, it seems very likely that the Bridge’s closure has led to an increase in air pollution in parts of Fulham.

20,000 vehicles used Hammersmith Bridge daily prior to its closure. Currently, 15,000 of those vehicles are making journeys via alternative routes. The performance of the road network has deteriorated sharply. Fulham Palace Road is taking an additional 3,000 vehicles a day and Putney Bridge is taking an additional 4,000 vehicles daily. It seems likely that both Munster Road and Parsons Green Lane are also taking hundreds of extra vehicles a day. I am continuing to lobby LBHF to provide me with air quality data for Fulham. My own view is that this data should be publicly accessible — an issue which I have raised in the House of Commons.

Since the closure in April, further defects have been picked up in the Bridge’s structure. I remain concerned that the £5.3 million of TfL money spent from 2015 did not pick up any of the microfractures that led to the sudden closure of the Bridge in April, or indeed any other of the critical defect that have now been discovered. £900,000 was spent by TfL on wardens to ensure that only one single decker bus crossed the Bridge at any time. Yet, I have received numerous reports of multiple buses on the Bridge simultaneously. I am also concerned by reports that a major repair job, budgeted at £27 million, was due to be carried out on Hammersmith Bridge in 2016. This was postponed to late 2017, but never took place.

The three options LBHF, who own the bridge, and TfL have looked at are a) keep the bridge closed to vehicles, and open only to cyclists and pedestrians; b) restore the bridge to its usual level of operation, or c) reinforce the bridge so that it can handle more and bigger buses as well. Given the gravity of the problems affecting the bridge structure, the costs are estimated at £70m, £120m and £150m respectively. These are far higher than initial projections of £30 - 40 million.

LBHF and TfL have chosen to proceed with option B - restoring the bridge to its normal functions. It will take three years. That is around a year and half quicker than Option C, and marginally longer than Option A.  However, I am concerned that the construction phase itself will not begin until 2021.The option of constructing a tunnel has been deemed too expensive and too disruptive. Likewise, a new Bridge has been ruled out as it will not receive the consent of Historic England and may not be any cheaper than the current proposal.

I have written jointly with neighbouring MPs, Justine Greening and Zac Goldsmith, to Helen Whately MP, Parliamentary Under-Secretary of State for Arts, Heritage and Tourism, to consider whether a further option is possible of using a high tensile steel surface placed above the current surface to take the strain of traffic, and without requiring substantial work to the original bridge structure. I understand that this option would be cheaper and a great deal quicker than Option B, which is currently being considered. The reason TfL haven't looked at this option so far is that it would likely be opposed by Historic England given that the Bridge is Grade II* listed.

There have been discussions about introducing a toll system for the bridge - to help pay for it. TfL are looking at what revenue would be generated by this option, and the impact of diverted traffic. TfL say that local residents would be exempt from any toll.

A temporary bridge is being considered for pedestrians and cyclists (motorbikes will still be able to be wheeled across) whilst repairs are being made to the structure of the bridge.  Further information will be provided on this in the coming weeks.

The proposal announced earlier this week from the marine engineering firm Beckett Rankine to construct a temporary bridge capable of carrying motor vehicles, which would run parallel to Hammersmith Bridge, is encouraging. I am meeting with the engineers responsible for the proposal urgently next week.

I have also received the following comments from TfL in response to the public meeting I hosted at St Etheldreda’s Church, Fulham on this matter on 1st August:

·         Action 1: TfL to confirm timings for improvements to Wimbledon branch of the District line.

Following discussion about the Four Lines Modernisation (4LM) programme and when the Wimbledon will start to see benefits, TfL want to clarify that the first timetable uplift is planned for December 2021 in central London and to Barking. The whole project – including the Wimbledon branch - is due to complete by 2023. The 4LM programme itself will deliver one extra train on the Wimbledon branch an hour. TfL hope to be able to increase frequencies further in the future. This further increase relies on TfL’s ability to run Piccadilly line, instead of District line, services to Ealing Broadway, which can only be achieved once they have upgraded the Piccadilly line.

There was a query from a constituent about capacity on the 220 bus route. TfL have looked at recent data (from July before the schools broke up) and this shows there to be sufficient capacity to meet demand.  However, TfL say that they recognise that additional traffic from the closure of Hammersmith Bridge can cause unreliability and lead to occasional crowding. TfL would be grateful if constituents could report any specific incidences of crowding. They can do that by using the following form: https://tfl.gov.uk/help-and-contact/contact-us-about-buses

Following the closure of Hammersmith Bridge, new signal strategies are in place to assist north and southbound traffic through the Fulham High Street/New Kings Road junction, which helps to move southbound traffic away from the roundabout. Due to the lack of signals at the roundabout itself, TfL say that they are restricted in their ability to prevent this roundabout from becoming blocked. TfL will be checking these new signal strategies now the summer holidays are finished to check that they are still appropriate and will take on board comments received at the public meeting as part of this work.

·         Action 4: TfL agreed to confirm whether the impact on emergency services has been considered.

TfL have been in touch with London Ambulance Service, which has confirmed that its response times are not significantly out of line with the norm. Their systems are working effectively to mitigate the impact of the closure. I have also been in contact with the Met Police who say that their response times have not been impacted.

·         Action 5: TfL agreed to review traffic movement and rat-running in Putney, including possible restrictions on loading on Putney High Street and possible suspensions of bays

Several signal timing changes have been made to ease congestion on Putney High Street. This has been done by reducing the length of time the traffic lights are on green both on Putney Hill and on the A3 which serves to reduce traffic flow onto Fulham High Street. The signal timings at the junction between Putney Bridge and Lower Richmond Road have to provide a delicate balance for the route 14 buses that use it while also ensuring the timings allow the flow of people crossing the road without having to wait too long. Nevertheless, now the summer break is over, TfL will be looking at all signal strategies in place following the bridge closure and will review them accordingly. This will include looking at the right turn off the bridge into Lower Richmond Road.

Actions from discussions with constituents after the meeting

·         Action 6: TfL agreed to confirm the action taken to manage traffic along Fulham Palace Rd since the bridge closure.

·         Action 7: TfL agreed to investigate if air quality is measured anywhere else other than Putney.

Monitoring stations are generally owned and managed by London Boroughs. The London Borough of Hammersmith & Fulham owns a monitoring station in Hammersmith town centre, which started operating in March 2019. There is also a station in Castelnau. Locations of air quality monitors can be found at this link: https://www.london.gov.uk/what-we-do/environment/pollution-and-air-quality/london-air-quality-map. It is also possible to view the data from the respective monitoring stations by clicking through on the page. There is no publicly accessible air quality in Fulham.

·         Action 8: TfL agreed to provide an update on the review of Hammersmith Gyratory.

TfL have reviewed the existing operation and have outlined their aims for this signal timing review. A team of engineers has visited Hammersmith Gyratory several times over the past few months. TfL have identified that the balance of traffic using the gyratory has changed since the closure of the bridge, and have planned how they will go about altering the traffic signal timings to reflect this new normal usage. Hammersmith Gyratory is very complex and finely tuned, so TfL need to undertake a comprehensive review, starting with the basic operation of each site, culminating in the holistic change that TfL are planning. Ultimately, TfL will be looking to smooth traffic movements on the southern side flowing to and from Fulham Palace Road.  TfL say that they will complete these changes by December.

·         Action 9: TfL agreed to investigate reports of congestion on Hammersmith Road back into Kensington Olympia.

TfL have very recently completed a review of traffic signals along Hammersmith Road, which included the junctions at North End Road, Edith Road and Brook Green. As part of this review, TfL have not identified significant congestion issues relating to the closure of Hammersmith Bridge. When TfL did observe instances of congestion, this was caused by vehicles being parked on the westbound approach to the North End Road junction (mainly Tesco lorries parked for loading/unloading, and lorries for the scaffolding works).

·         Action 10: One constituent reported that there was an issue with the linking between the traffic signals and a pedestrian crossing, as traffic exiting left onto A4 from Pallister is immediately stopped on red for the pedestrian crossing and then this blocks back into the side road and prevents vehicles progressing, causing a long queue on the side road. TfL agreed to investigate.

TfL have investigated this issue and can confirm that there is no fault with the linking between the traffic signals and the pedestrian crossing and this junction is running as it is intended to. At this junction, the east and westbound movements along the A4 Talgarth Road receive a green signal simultaneously, and during this time, there is a red man for pedestrians on the western arm of the junction. Once the green signal for traffic on Talgarth Road shuts down, traffic on Gliddon Road and Palliser Road receives a green signal. Alongside this traffic movement on Gliddon Road, if a pedestrian has pressed the button on the western arm of the junction, the signal on the crossing will turn to a green man, and left turning traffic from Pallister Road will be stopped at the stopline on a red signal at the pedestrian crossing. If the button is not pressed, the left turning traffic will continue receiving a green signal at the crossing while the red man continues to appear to those at the pedestrian crossing.

I know that many residents will have further comments regarding the Bridge’s closure, and I would be grateful if you could send them directly to Hammersmith and Fulham Council at bridgeproject@lbhf.gov.uk. Please copy me in.